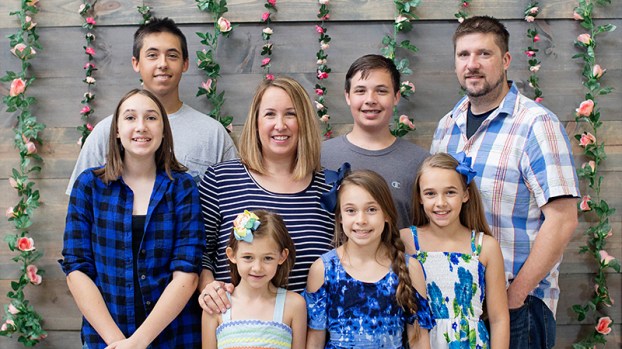 Marshall Thomas, 16, of Suffolk, was diagnosed with leukemia while on a family vacation in June. He, his parents, brother and four sisters are in Colorado while he receives treatment at Children’s Hospital Colorado in Aurora.

Family optimistic in face of diagnosis

It’s been a new normal for the Thomas family since their son, Marshall, was diagnosed with leukemia a little more than two weeks ago while returning from a family vacation.

Now in the Denver, Colo., suburb of Aurora at Children’s Hospital Colorado, Marshall, his four sisters, a brother and parents, Nick and Melissa Thomas, await the completion of his first stage of treatment before they can return to their Holland Road home in Suffolk.

They ended up in the Denver area, as the city was a stopover on the way back from Seattle following an Alaskan cruise, but Marshall was not well enough to continue the journey, according to his mother, Melissa Thomas. Before the day was through, they received the diagnosis that has changed their lives but has not shaken their faith.

“It’s one of those things where you take every day as it comes,” Melissa Thomas said.

The first hint that something might be wrong with Marshall came about two weeks prior to leaving Suffolk as the family was preparing to take an Alaskan cruise.

Marshall, who is homeschooled and had been working as a lifeguard at Davis Lakes Campground, had come down with what the family thought was a cold, which his mother chalked up to being in the cool water.

As she was sick, too, Melissa Thomas didn’t think too much of her son’s illness, but after a couple of days, she had recovered and he had not.

After about a week and a half of Marshall being sick, Melissa Thomas took her son to an urgent care facility, where he was diagnosed with strep throat, an ear infection and mononucleosis. He received antibiotics for the strep throat and the ear infection, and had to wait it out for the mononucleosis to take its course. The doctor told the family Marshall could still go on the cruise, but he should get as much rest as possible.

Marshall, who is 16 and the oldest of the six children, initially started to feel better within the first 48 hours after taking Vitamin C and antibiotics, but he still tired easily, which the family attributed to the mononucleosis, so they went ahead with the trip.

They flew to Seattle and subsequently took the first half of the cruise without incident — Marshall was even able to go deep-sea fishing with his father and brother — but he stayed in bed for most of the second half of the trip, feeling wiped out and suffering from motion sickness.

On June 15, the family took an early flight from Seattle to head back home to Suffolk, but by the time the flight made a scheduled stop in Denver, Marshall was not feeling well. EMTs examined him and determined that he needed to go to the hospital.

He had some symptoms similar to appendicitis, Melissa Thomas said. By later that evening, doctors were no longer worried about appendicitis, but they still did not know what Marshall was dealing with. Within hours, they did — pre-B acute lymphoblastic leukemia.

Though it has scrambled their world a bit, they have adjusted to the new normal, rotating a parent to spend with Marshall and with their other children as he is in the midst of the first phase of treatment.

Soon after the diagnosis, they went from the ER to the oncology floor of the hospital, “and that’s where we’ve been ever since,” Melissa Thomas said.

Their faith has been helping them get through. The Thomas family attends Community Church, which meets at King’s Fork High School, and has received support from there and across the country. Their faith is integral to their lives, she said, and they have been touched by the outpouring of prayer and support. More than 2,100 people have joined their March for Marshall Facebook group to keep up to date about Marshall’s progress during his treatment.

“People have really come alongside us,” Melissa Thomas said. “In these type of situations, it can be hard to even know what to pray. My early prayers were really just, ‘Heal my baby.’ Not much depth, because we were operating from a place of fear, basically. So to have people, our core group of men and women in our lives that share our faith and to come along and say, ‘We have the works. God knows your heart. He knows what you would say if you could. But let us handle the rest. Let us handle it for you and hold you up.’”

A close family friend in Denver helped the family initially, she said, allowing them to stay at her home while they sorted through the new normal, and through media coverage there, they received enough in donations to help pay for a place to stay, a rental car and gift cards to get food and other provisions.

Marshall’s first phase of treatment — the induction phase — is 29 days, and he is about halfway through that. Once he completes it, and his blood counts are elevated enough, he and the family will be able to fly home and continue treatment at Children’s Hospital of The King’s Daughters in Norfolk. That won’t be until late this month.

He’s in a lot better shape than when he first arrived, his mother said, and though he’s dealing with headaches and nausea as part of his treatment, Marshall is making progress. While his mother notes that he has typical teen moments where he may tire of being around one parent or another, he’s a sweet and funny person who loves to be outdoors to hunt and fish.

“He’s doing really good right now,” Melissa Thomas said. “He’s a whole lot better now than when he first got here … (and) in good spirits for the most part.”

She said his long-term prognosis is good, but he faces about three years of treatment. He’ll receive treatment on a weekly basis, some of which will require hospital stays of days at a time.

“We believe very strongly that God will heal him,” Melissa Thomas said. “That’s just really the end of the subject. That’s what’s going to happen. That’s just 100 percent what we know.”

Marshall’s football team, the Beach Breakers, has fundraised on his behalf, bringing in nearly $2,000. Mason’s Grill and Smokehouse, a family favorite, will host a fundraiser for the Thomas family July 9, with 10 percent of all sales throughout the day to be donated to the family.

“Every turn, every obstacle, people have just met and stepped up and risen to the occasion,” Melissa Thomas said, “and we have just been incredibly blessed by all of that.”

Mason’s Grill and Smokehouse at 148 Burnetts Way will host a fundraiser for the Thomas family July 9, with 10 percent of all sales to be donated to the family. There will also be a 50/50 and prize raffles. The family welcomes anyone to follow their public Facebook page for updates at www.facebook.com/marchformarshall. Anyone wanting to help defray costs for the Thomas family can make a financial donation through PayPal (check the friends and family option) marchformarshall@gmail.com, Venmo (@melissa-thomas-77) or send a digital Amazon gift card to the same email address, marchformarshall@gmail.com.

Three teenagers from Italy have been experiencing American life in Suffolk for the past week, and on Tuesday these ladies... read more