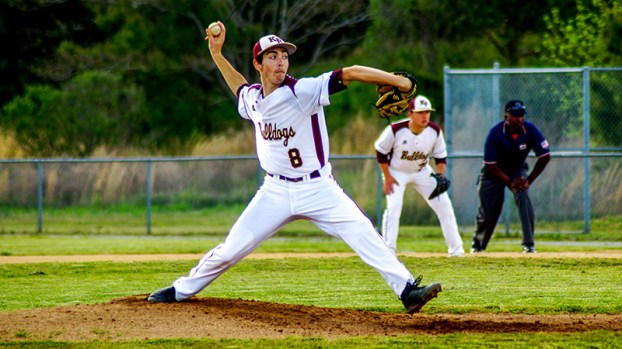 Mason Brown, a King’s Fork High School alumnus, has been having a strong summer as he will play in the Prospect League. (Caroline LaMagna Photo)

Brown to play in Prospect League

“It’s been very good summer so far,” Brown said. “Just getting to meet new people and we are all playing the game we love has been great.”

Brown has been having such a strong season for the Shredders that he was selected to the 2019 All-Star game. He described the opportunity as great and was happy to be a part of it. He is gearing up to head to Chicago to play in the Prospect League for a chance to continue to showcase his talent.

“For me it’s all about the experience when it comes to playing in these summer leagues,” he said. “I get a chance to showcase my talents at a higher level, and I’m excited about that.”

The Prospect League is one of the top leagues in the nation, which is primarily comprised of college players from North America and other places as well.

As a freshman for the PDCCC baseball team, Brown made an appearance in 18 games last season. He struck out 35 batters. From his senior year at King’s Fork until now, Brown feels he’s made significant improvements.

“After coming out of King’s Fork, I was focused more on getting where I wanted to be as a pitcher,” he said. “And with the help of some of my teammates and my coaching staff, they really started to fine-tune my mechanics. What I have learned over the years has been an eye-opening experience getting me ready for the Prospect League.”

With Brown having one more year at the community college level, he has garnered interest from some schools. He will continue to go through his options to see which schools fit him academically and athletically.

In his time at King’s Fork, Brown was able to be a standout hitter and pitcher for the Bulldogs.

Suffolk native Brandon Lowe was selected to the 2019 MLB All-Star game as a replacement reserve for the American League... read more