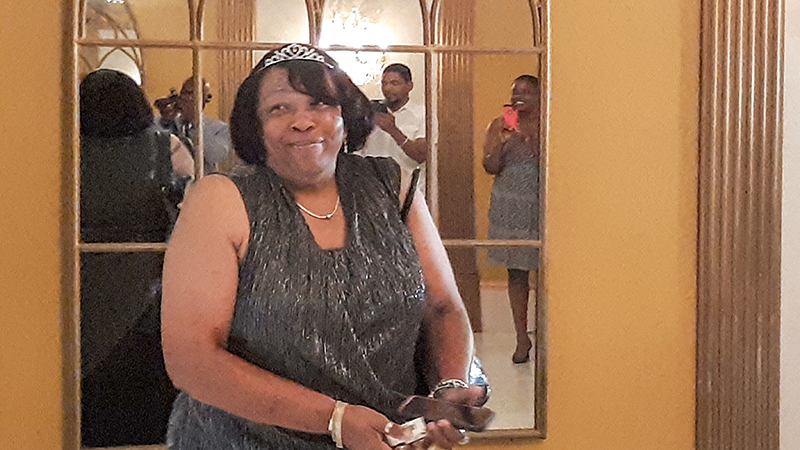 Former Lakeland High School teacher and coach Stephanie Odom is shocked as she walks into the ballroom at the First Lady on June 28 to find many of her former students, athletes and young people she mentored there to honor her.

A group of Lakeland High School graduates, mostly from the 1990s, took time on June 28 to recognize a mentor from their youth who still influences their lives today.

The alumni planned a surprise party for Stephanie Odom, who taught health, physical education and driver’s education for 20 years at Lakeland before retiring in 2010. She also coached girls’ basketball, track and volleyball at the school. Prior to Lakeland, she taught at John Yeates for 13 years.

LaTroy Brinkley, a downtown businessman and Lakeland graduate, said he got the idea while reminiscing about high school and thinking about all that Odom had done for him and his peers.

“She did a lot for a lot of us, and we never in our adult years got a chance to formally say ‘thank you,’” Brinkley said.

He called Sarah Knight, another Lakeland graduate who works in the Circuit Court Clerk’s Office, and together they reached out to classmates who were eager to support the event.

“It was awesome,” Brinkley said. “It was a great event.”

Odom’s children told her to get dressed up because they were taking her out for her birthday, which was July 3. But then they arrived at the First Lady on West Washington Street, and Odom was diverted upstairs and then walked down a staircase into the grand ballroom, where more than a dozen of her former students were waiting to surprise her.

“It was unbelievable,” Odom, a Suffolk native who graduated from Forest Glen High School in 1973, said this week.

The group enjoyed a buffet dinner before Odom and her family listened to each of her former students tell how she had impacted their lives. Brinkley read a list of notable accomplishments and career choices of dozens of Odom’s former students, also noting that many are now philanthropists and mentors in their own rights.

“You can look around and see what your legacy has been,” he said.

Patricia Ward, who graduated from Lakeland in 1997 and was a basketball player, said her former teacher and coach was very influential in her life.

“She saw something in me I didn’t see in myself,” Ward said. “She made me feel like I could do anything I wanted to do.”

Ward said she remembered a time when her grades were slipping, and Odom pulled her aside to talk to her.

“I don’t know if it was the coach in her or the mother in her, but she let me know that I needed to put my education first,” Ward said.

Former basketball player Marlvetta Lewis, a 1998 graduate, went on to graduate from Virginia State University and join the U.S. Army.

“Without her, I wouldn’t have done half of what I did,” Lewis said.

Odom was the sponsor of the STAND Club at Lakeland. The acronym stood for Students Taking A New Direction.

She took students in the club on fun trips as well as to college visits and even to a prison for a “scared straight” program.

Dedrick Knight, a 1994 graduate, remembers being on that trip.

“I was a troublemaker, but she never looked down on us,” he said. “She never forgot us.”

“We would not be who we are without her,” she said. “She didn’t lose contact with us.”

This week, Odom said some of the former students brought up things she didn’t even remember, but they were very influential to the students themselves.

“You do things and don’t even remember them, because you do it from the heart,” she said. “We (educators) don’t really know until later on the impact that we really have; we just reach out to the kids and do the best we can.