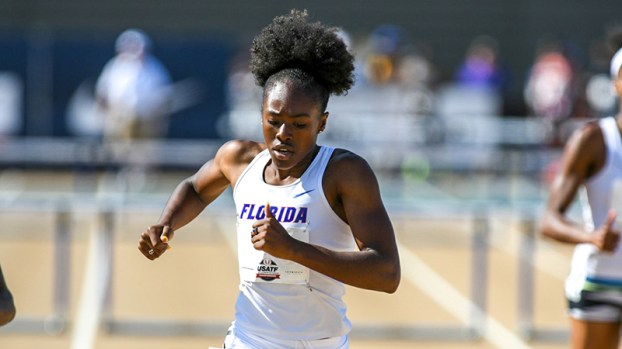 Former WAR standout Brandee’ Johnson is excited about her forthcoming senior season and has a goal in mind for the future: to become an Olympian. (University of Florida Photo)

After finishing up her third year at the University of Florida, Johnson has already locked into her senior season. Each year has been a different experience for Johnson, and this past season was no different. After coming off of a fairly strong sophomore season, Johnson didn’t quite have the junior season she was looking for. However, she still considered it a win.

“This year was OK,” she said. “But as always, if you can finish the year knowing what you can correct, it’s always a win.”

Johnson continued to love and embrace every moment she could this season. During her outdoor season, she finished eighth in the 400 hurdles and 12th in the 100 hurdles at the Southeastern Conference Outdoor Championships. She took ninth in the 60 hurdles at the SEC Indoor Championships while also qualifying for the NCAA East Preliminaries in the 100 hurdles. Johnson dealt with some reoccurring injuries and surgery, which didn’t have her in the best shape physically, but she’s confident she can bounce back.

“This year was the last step to prep for what’s coming next year,” she said. “I was dealing with some reoccurring injuries and things this season, but I’m confident what’s in store for next season. I believe in myself, and I know I belong where I am, and I’m about to shock the world.”

Mentally, Johnson also already envisioned the success she feels like she is going to have for her senior season. As soon as she crossed the line at the regional qualifier and didn’t make it to nationals, she knew what it was going to take. The goal is to become an Olympian, and with the 2020 games a year from now, Johnson has already put her sights there with an important senior season coming up. She hopes to finish an SEC and NCAA champion as well as an Olympian.

“It’s something I have felt for a while,” she said. “It’s something I want to be, an Olympian, to be standing on the podium listening to the national anthem. So now all I have to do is do it. When you feel something long enough, you generate the energy towards you.”

At Nansemond River, Johnson was one of the premier athletes in the state and the country. She is a recipient of the Virginia Gatorade Female Athlete of the Year award. She is a multi-time state and national champion. She is also the recipient of the 2014-2015 Suffolk News-Herald Female Winter Player of the Year award. Johnson also competed internationally in the World Junior Championships.