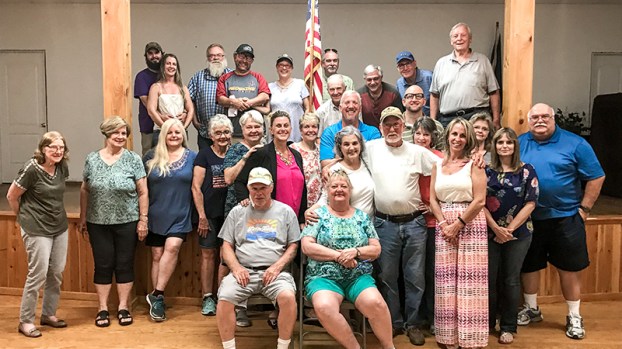 The Crittenden, Eclipse & Hobson Civic League held its first community meeting on the evening of June 26 at the C.E.&H. Ruritan Hall on Eclipse Drive.

The theme of the meeting was “Celebrating the Past — Visioning the Future,” led by Kelly Hengler, chair for the civic league’s interim board. Hengler discussed the rich history of the watermen community, as well as the importance of formalizing the civic league.

Hengler and others have been organizing efforts to preserve their community’s culture ever since community members were shocked by a construction development in Eclipse last year.

“We have given expressive opposition to any change or character in the village, and we’ve had little to no actual feedback to assure that our character would not be further altered,” Hengler said.

Community members have collaborated over the past 10 months to preserve the wetlands and their community’s heritage through historic recognition efforts for the Eclipse and Crittenden communities. Hengler said it had become clear that a more formalized process was needed.

She and her neighbors learned there wasn’t an active civic league for the Crittenden and Eclipse communities, which led them to start a new one.

“We really needed to offer a process for the community to engage in,” Hengler said, and to take responsibility in forming an organized group in order to engage with the city.

There were 30 community members at the June 26 meeting, which Hengler saw as a “tremendous” start.

“There were really good questions (and) good feedback,” she said, with residents actively voting, making inquiries and expressions their concerns. “It wasn’t just participation. It was active collaboration between the people that were present, and that was nice.”

This civic league is open to all residents, businesses, churches and other organizations in the Eclipse and Crittenden communities. Hengler hopes to expand the league’s membership as it establishes several work groups and forms a cohesive vision statement for future business.

There are plans for more family-oriented activities coming up for the community, and an open call for people to step forward for permanent officer and board positions for the civic league.

The C.E.&H. Civic League work group will hold its next open community meeting this Wednesday, July 10, from 6:30 to 8 p.m. in the fellowship hall at James River Community Church, 8909 Eclipse Drive. The topics will include the vision statement, board positions, bylaws and charter.

Another meeting will be held on Aug. 7 at the C.E.&H. Ruritan Hall for nominations of officers, community projects and issues on which to focus.

Having Fourth fun in Eclipse