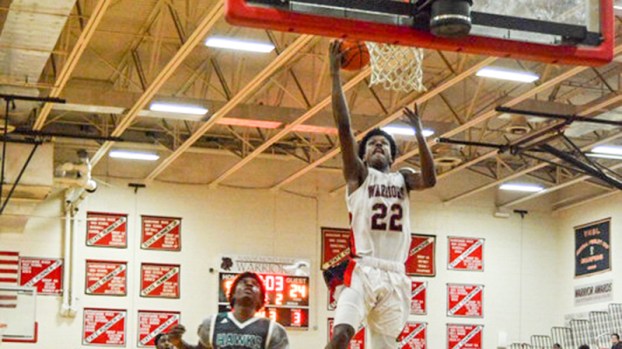 Langston said going through the recruiting process was a long one. He spoke with many different coaches and schools but ultimately felt like the best fit was with Bridgewater.

“No school showed me the same interest as Bridgewater,” Langston said. “They came to practices at Nansemond, and they allowed me to visit the school, and it felt like home.”

Langston liked the campus and the fact that the classes were smaller in size, which he felt could help him academically.

The coaches there really welcomed him as if he were one of their own, he said. The coaches haven’t gone into detail yet with Langston about the type of role they see him playing; however, Langston is comfortable wherever his coaches put him.

“It most likely will all depend on how I adjust to the college level,” he said. “I’m not sure about what position they’ll put me at, but whenever they decide to put me, I’m going to work my hardest.”

Last season, Langston was part of a Nansemond River team that somewhat returned to prominence. After a stretch of about three seasons where the Warriors were barely winning games, they turned things around last season. They finished third in the district and ended up making the playoffs and advanced to the Class 5 Region A semifinals, where it took a buzzer-beater from Green Run High School to send the Warriors home. Langston was also an All-District honorable mention.

“It was a good year,” he said. “It could have gone a bit better, but in the end, it was good. The confidence in my game really increased as the season went on, especially with Coach (Ed) Young and my teammates putting their trust in me every night to guard the best scorer on the floor.”

Langston admitted he didn’t grow up envisioning himself playing basketball in college. He had grown up playing baseball and, up until his freshman year of high school, felt like that may have been the path for him. But after he started playing basketball, things didn’t feel the same with baseball, and he decided to pursue the hardwood.

Langston is excited about the energy and versatility he will be able to bring to the Bridgewater program.

After competing in the Tidewater Summer League, Dominick Claxton is looking to keep his baseball skills sharp. After transferring from... read more