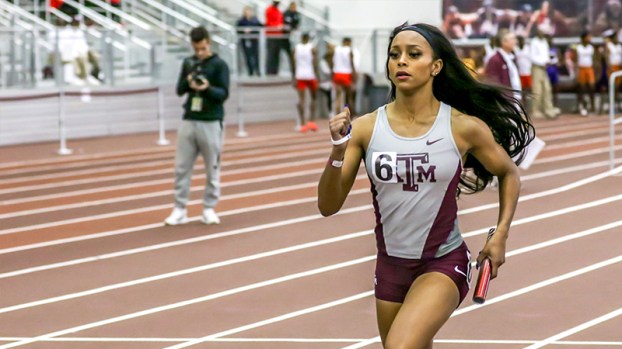 Syaira Richardson took fourth in the 400 at the North American, Central American and Caribbean U23 championships. (Russell James Photo)

Richardson competes in NACAC U23 championships

The NACAC U23 Championships were over the weekend in Queretaro, Mexico, and Richardson represented Team USA in the 400, competing in the semifinals last Friday and finals on Saturday.

Richardson ran a time of 53.30 in the semifinal and then went on to run a time of 53.04 in the finals, which was good for fourth place. This continues Richardson’s strong sophomore campaign for Texas A&M University women’s track and field team. During her full season, she took silver medals in the indoor and outdoor 400 in the Southeastern Conference Championships.

During the outdoor season, she helped the Aggies win an NCAA title in the Outdoor championships in the 4×400. Richardson also ran individually in the 400 and placed seventh in the NCAA Outdoor Championships.

Coming out of Nansemond River, Richardson signed with Ohio State University. After a year there, she felt like it was best for her to transfer, and she did so, reopening up her recruitment and choosing Texas A&M.

At OSU, she did compete at a high level, even though she didn’t feel it was her best. She was part of a 4×400 team that placed seventh at the NCAA Outdoor Championships as a freshman. There were also some solid performances throughout the Big 10 Conference Championships during her only year there.

With a strong year this coming season and with the 2020 Olympics on the horizon, Richardson may have a chance at seeing herself represent Team USA once more.

At Nansemond River, Richardson helped bring home state and national titles. During her senior year, she had a historic performance at the state meets, taking gold in four events. As she went into her senior season, she was one of the highly regarded recruits in her class.