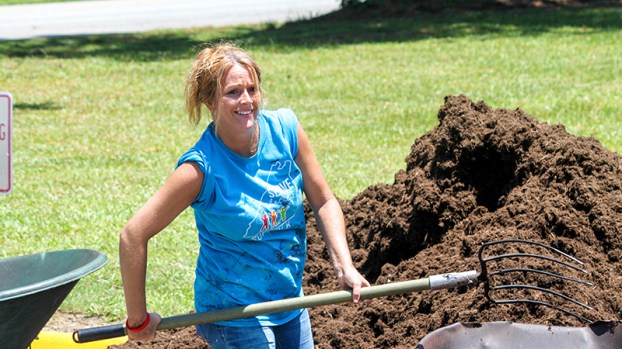 Lindsey Beasley helps to mulch the grounds at Kilby Shores Elementary School Tuesday. She’s one of more than 200 volunteers who have fanned out to nine Suffolk schools and other areas of the community as part of the Serve the City Suffolk, a local mission trip with five churches as partners — Southside Baptist Church, Liberty Spring Christian Church, Cypress Chapel Christian Church, Holland Baptist Church and Open Door Church.

For Jesse Matthews and the others who are volunteering their time this week for this year’s sixth annual Serve the City event, they’re not doing it for any attention or notoriety.

It’s about doing God’s work and serving the community.

“This right here, I don’t want any thank yous,” said Matthews, who has been bringing with him workers from his Tidewater Lawn and Landscaping business this week.

“Our cause is simple,” Violette said. “God’s word tells us to love our neighbors. He doesn’t ask us to do it. It’s a commandment. We want to love on our neighbors, and so, by going and doing this, we’re able to show the love of Jesus without asking for anything in return.”

The first year of Serve the City, Matthews said he provided tools, but did not come out to help. After that, he felt a conviction to help, and now, he sets aside time in his schedule to take part.

“So why do I donate my tools, my times, my guys … why do I give my stuff? This is how we look at it,” Matthews said. “It all belongs to God. God gave me the ability and a gift to go and make this money. He gave me these nice things. He gave me this work. So He gave me that money. Here I am buying these tools, it’s His anyway, so why not?”

Josh Butts, a pastor of students and singles at Southside Baptist who was out at Kilby Shores Tuesday helping paint the interior of the school, said he appreciates the relationships forged with the schools.

“It’s really just a joint effort just to give these kids something nice to come back to at the end of the summer and give them a fresh start,” Butts said.

Along with Kilby Shores, eight other Suffolk schools are getting makeovers, including elementary schools at Pioneer, Elephant’s Fork, Nansemond Parkway and Booker T. Washington, as well as King’s Fork and Forest Glen middle schools, and King’s Fork and Lakeland high schools. It’s a big growth for a program that initially started in 2014 with three schools.

“That’s a big deal for us, being able to provide for them,” Violette said.

But the work at the schools is just one aspect of Serve the City that began Monday and will continue through Thursday, Violette said.

About 230 volunteers — nearly half of which are out on job sites — have turned out to do everything from the work at the schools, to cooking and serving meals for first responders, businesses, schools and volunteers, to packaging items and making bedrolls out of plastic bags for the city’s homeless population. Volunteers as young as 6 years old are helping, and those who can’t be out at job sites are helping through other means at the church.

“Lots of phases, lots of hands, it takes a small army to make it happen,” Violette said.

Serve the City volunteers fed more than 200 people Monday and Tuesday, and they expect to feed another 300 Wednesday.

Volunteers will also fan out to neighborhoods throughout the city to serve the needs of the community, whether it’s passing out bottled water, mowing grass or landscaping yards. They will also be delivering lunch to first responders. Violette said they all hope to see the program expand to add more church partners and more schools and people to help.

And though Matthews and the others weren’t out there for attention, they have received positive feedback for their work, and he said it makes their day.

“Not only are you teaching people that don’t know how to do this stuff to do this stuff the right way, there was a lady on a bus, she saw us at Forest Glen yesterday and she stopped and she said, ‘I didn’t have a chance to stop and tell you all thank you, but I wanted to stop and make it a point to tell you thank you today. That just — it touches your heart.”

Schadel Sheet Metal Works celebrated 100 years in business with a party on June 21. The company attributes its longevity... read more