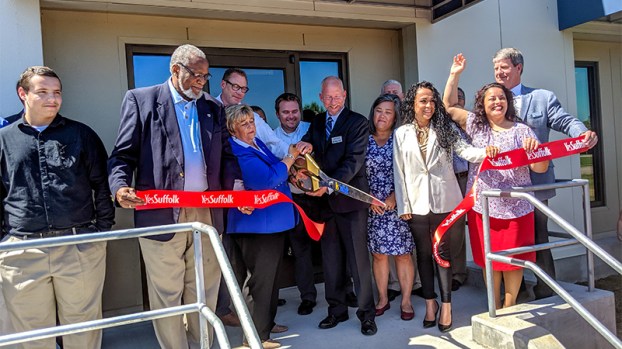 Blue Bell Ice Cream’s Suffolk distribution center held its ribbon cutting Wednesday before a crowd of hundreds who had come for a tour of the facility as well as to get a sampling of the company’s ice cream and frozen treats.

For the hundreds who turned out Wednesday for free ice cream and frozen treats as part of the ribbon cutting for Blue Bell Ice Cream’s distribution center in North Suffolk, it will likely be the coldest they will get all summer.

During tours of its new 14,000 square-foot facility in the Northgate Commerce Park, people got to go onto the loading dock, which is kept at a cool 45 degrees. Inside the 7,000-square-foot cold storage freezer used to store Blue Bell’s products, and the trucks used to deliver them, temperatures are kept at an even cooler -20 degrees.

But the stars of the tour were those scooping and passing out Blue Bell’s ice cream and other frozen treats, as company workers scooped hundreds of cups of ice creams to eager children and adults looking to cool off on a hot day.

“I promise we have plenty of ice cream,” Comer shouted to the crowd outside.

And indeed, there was. Even with its freezer at only 40 percent of capacity, it was plenty for everyone there.

As for the formalities, Mayor Linda T. Johnson praised Blue Bell’s presence in Suffolk, and noted her freezer at home filled with Blue Bell ice cream. She said she appreciated the company’s trust in Suffolk to locate in the city.

“This is one of the bigger ribbon cuttings we’ve seen in quite some time,” Byrd told the Economic Development Authority meeting Wednesday afternoon. It echoed comments from Comer, in which he said it was one of the larger turnouts of any Blue Bell opening that he could recall.

Blue Bell’s Suffolk location has 18 employees — most full time, but three of which are part-time workers. Comer said its capacity is more than enough space to hold all of the Blue Bell product that comes from one of its production facilities in Alabama, Oklahoma or Texas. It is then delivered to stores within a 70-mile radius of the city, as the company has “a pretty refined system of getting product in and getting product out.”

“If the day comes where we need a greater output, we could bump our capacity up if we needed to,” Comer said.

The company’s drivers, because they interact with customers and have first-hand knowledge of what Blue Bell products are in demand to get out to stores, have more autonomy than most, according to Comer.

“Our drivers control 100 percent of the inventory that goes onto their truck and off of their truck,” Comer said. “When they finish up any given day, they can take a look at what they have on their truck. They know what they need the next day. They place that order and it comes back here, and we pick that order piece by piece for them so that they can reload the truck and be ready for the next day.”

Access was a big selling point for Blue Bell to locate in Suffolk, as Comer cited the proximity to Nansemond Parkway and Interstate 664. Comer says the sky’s the limit for the company in the city and said it is ready to grow with the Hampton Roads and northeastern North Carolina regions.

“We’re just honored to celebrate the opening of this new branch,” Comer said. “We’re glad to say we have thrown anchor in Suffolk, and we plan to do business here for many, many years.”

By Rachel Wartian Intern The Suffolk-Nansemond Historical Society this summer is hosting an exhibit of wedding memorabilia from throughout the... read more