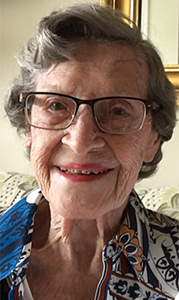 Esther Jett Holland, 98, died July 9, 2019, in her home at Lake Prince Woods, Suffolk. She was born in Norfolk to the late Joseph Clarence Jett and Esther Sanford Jett. She was predeceased by her husband, Hugh Latane Holland Jr., and her sister, Mary Payne Jett Cole.

She graduated from Maury High School in 1939 and Sweet Briar College in 1943. She was married May 14, 1949, and lived the rest of her life in Suffolk. She taught second grade Sunday school with her husband for many years and served on the altar guild at St. Paul’s Episcopal Church, Suffolk. Esther was the first woman elected to the vestry.

A memorial service will be held at 11 a.m. Saturday, July 13, 2019, at St. Paul’s Episcopal Church, 213 N. Main St., Suffolk, with the Very Rev. Dr. Keith Emerson presiding. The family will receive friends in the parish hall following the service. Burial will be private in Cedar Hill Cemetery. In lieu of flowers, the family suggests that a donation be made to St. Paul’s Church.

R.W. Baker & Co. Funeral Home and Crematory, 509 W. Washington St., Suffolk, VA 23434 is serving the family. The family would like to acknowledge the caregivers who attended Mrs. Holland for many years, allowing her to stay in her home. Condolences may be registered at RWBakerFH.com.