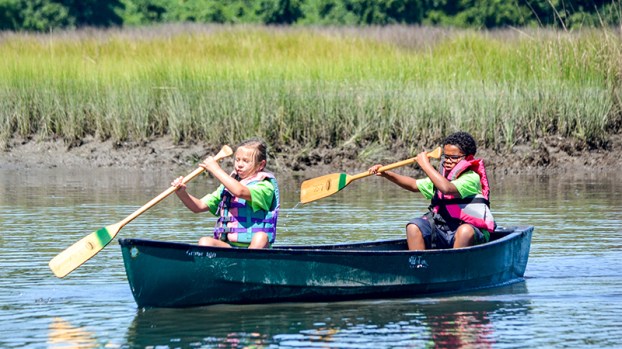 Dozens of students dove into lessons in Suffolk waters on Wednesday held by the Tidewater Regional Governor’s School, with assistance from the Nansemond River Preservation Alliance and Suffolk Public Works.

The governor’s school has held this hands-on learning program since 1993. The school selects 60 gifted students — rising fourth-graders through seventh-graders — out of more than 200 applicants from Suffolk, Isle of Wight, Franklin and Southampton.

This year, 30 of those students are from Suffolk Public Schools, according to Tidewater Regional Governor’s School Executive Director Leslie Moring.

This is also the first year that NRPA has partnered with the Governor’s School for the program, which is grant funded by the Virginia Department of Education. The theme for this year is “deeper learning,” with activities that show students hands-on marine science lessons from both micro and macro perspectives.

“This program is important because through experimentation, observation and research, students get to work in cross-age groups to explore the technology, engineering and arts involved in marine science,” Moring wrote in an email. “Students have the opportunity to gain real-world experience and to showcase what they have learned through a culminating project.”

Students were divided into groups between Bennett’s Creek Park and Hoffler Creek Pier on Wednesday. At Bennett’s Creek, they were instructed by NRPA volunteers, as well as Public Works personnel.

NRPA volunteer Mike Reiss had the young students put on their lifejackets and pair up into canoes. Students then paddled out from the dock and into Bennett’s Creek, with calm waters under clear blue skies.

Many of the students hadn’t been out in a canoe before, but their nerves gave way to excitement by the time they paddled back to the beach.

“When you haven’t paddled before it’s a little confusing, but they’re doing well,” Reiss said about the students.

These students put on water waders back at the dock for another lesson involving a seine net.

NRPA volunteer Cathy Roberts and Erin Rountree with Suffolk Public Works showed the students how to use the seine net to gather critters from the water. The students then picked up the fiddler crabs, fish and other water life into plastic containers for a closer look.

“It kind of kept jumping,” Willow said about the shrimp she held. “It was kind of slimy and wiggly.”

The students were very excited for all the new experiences. They asked the adults plenty of questions and gave them their undivided attention — at least when they weren’t holding a crab for the first time.

“They are just so excited about everything,” said Megan Farabaugh, gifted resource teacher at Col. Fred Cherry Middle School. She said the students were “totally consumed with learning” about animals in their natural habitat.

Opportunities like these provide children with outdoor learning classrooms that make a more significant impression on them than PowerPoint slides and textbooks. It’s that kind of experience that NRPA seeks to provide, as well, according to NRPA President Elizabeth Taraski.

NRPA volunteer Karla Smith was also impressed by her “super” students on Wednesday as she presented tools used for water quality analysis, such as a secchi disk, which is used to measure the water’s transparency, also known as turbidity.

“I like it when they haven’t done it all yet, because then they’re huge sponges,” Smith said about the students, whether it’s their first time canoeing or using a seine net or secchi disk. “If it’s your first time going out in a canoe, or seeing the critter (and) learning the terminology — or pulling a seine net — then you’re not bored.

NRPA’s Cindi Pinell also showed the children how to clean, sort and place oysters in oyster gardens on Hoffler Creek Wednesday with help from high school volunteers. The students also learned about the importance of oysters in filtering the waterways.

Moring said that each of these lessons addressed a different aspect of STEAM learning — science, technology, engineering, the arts and mathematics. They worked in groups with students they hadn’t met before, and got experience with “argument-based inquiry.”

“It promotes science by having students deriving their own questions and making arguments to support their own claims,” she said, which challenges them to experiment and collect evidence.

For Jesse Matthews and the others who are volunteering their time this week for this year’s sixth annual Serve the... read more