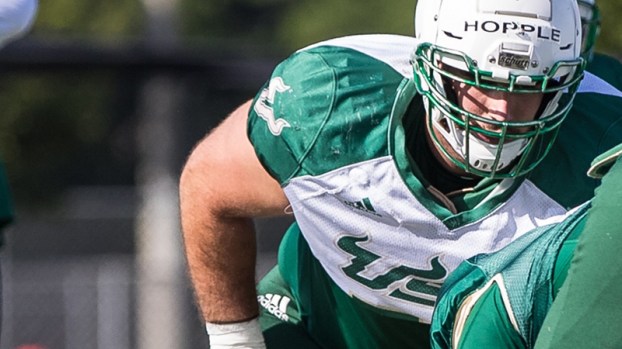 Hopple ready for a big year at USF

After transferring to the University of South Florida last year, a former Warrior football standout is hoping for a big year.

Jarrett Hopple is preparing for what he sees as a crucial junior year for himself. After spending two seasons at Virginia Tech, Hopple thought it would be best for him to transfer last year. In opening up his recruitment once again, he decided the best place to go was to USF.

However, due to NCAA rules, Hopple had to sit out the 2018 season. With the 2019 season a little over a month away, he is excited about getting back on the field.

“I’m feeling pretty good,” Hopple said. “Been working hard this offseason. This is a big year for me, for sure.”

After spending two seasons at Virginia Tech and not getting on the field, he knew he needed a change. He didn’t want to put himself in the same situation again where another year had passed and he had not touched the field. It has motivated him even more to take his game up a notch so he can be where he truly feels he needs to be.

“I’ve always worked hard, but I definitely turned it up a notch this year,” he said. “I’m looking forward to getting on the field this year and showing what I can do.”

During the spring, Hopple has been working at left tackle and right tackle for the Bulls. He feels like he has improved on the little things, which will give him a chance to see the field more.

“I feel like I improved over the spring focusing on the little things,” he said. “I see myself getting on the field, to say the least.”

Hopple has not played in a game since his senior year of high school, which makes getting on the field the one thing for which he’s most excited during the 2019 season. This year should be an exciting one for the USF program as a whole. Hopple and the Bulls will go up against the best of the best at the NCAA Division I level.

While at Nansemond River, Hopple was a highly regarded offensive lineman in Virginia. He was an All-Conference and an All-State selection in his time there and had multiple Division I offers before deciding on going to Virginia Tech.

Heading into his third season for Old Dominion University, Demetrius Stitmon is hopeful for a strong year. Everything will be... read more