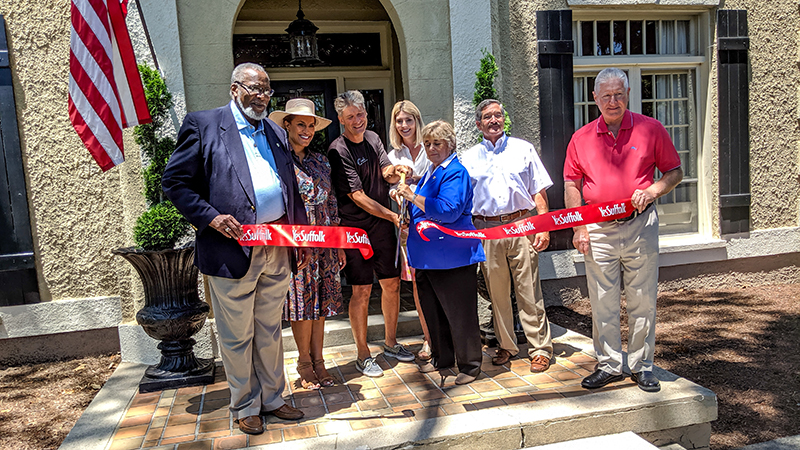 A ribbon cutting ceremony to mark the grand opening of the Pinner House, an intimate event venue and boutique bed and breakfast, was held Wednesday.

Originally built in the 1890s by John B. Pinner and restored over the past six months, the Pinner House celebrated its grand opening Wednesday, transformed into an intimate events venue and boutique bed and breakfast.

Co-owners Allyn and Kris Brown, who have lived in the home at 231 Pinner St. for more than 25 years, aim to host weddings, corporate functions and private retreats, as well as to have overnight guests stay in one of the upstairs rooms. Kris Brown said they’re looking to host any kind of milestone event.

“It’s not a traditional bed and breakfast,” Kris Brown said. “So certainly, small events are more of what we’re looking to do. We do have the rooms so families can stay here as well.”

The Browns have hired Mia Byrd as event coordinator. Byrd, the founder and creative director of Prowess Creative Consulting, has experience as a special events manager and director for the Norfolk Botanical Garden and the Chrysler Museum of Art.

Byrd said there is plenty of outdoor space at the house, and it has numerous touches that she expects will provide people with a memorable experience, rather than just being at an event.

“It just has a lot of personality and character, and you can create your own event without having that hotel feel,” Byrd said.

Kris Brown said guests would get a highly customized package that’s specific to each person or group, featuring higher-end and local products.

“We’re certainly wanting to keep it at a certain caliber, a certain level,” Kris Brown said. “It’s very intimate, so it’s not for large weddings.”

In preparing to open the Pinner House, the Browns had every wall painted and the floors refinished, and they furnished and decorated all of the rooms.

Allyn Brown said they were looking for a fresh, European feel to the home.

“We got to start from scratch and just do something that was a style that was very cohesive, and just to put a feel in there that was modern, yet vintage,” Allyn Brown said.

Mayor Linda T. Johnson expects it to be a special place for people to make lasting memories.

“We’re going to thank you for making the commitment and for opening this beautiful home,” Johnson said. “It is incredible, and I don’t think you can imagine until you walk through here.”

The Browns feel the Pinner House will help showcase the city’s downtown area and businesses in a positive light, and help lift them up.

“I think that it’s … setting a standard, creating some excitement and showing people the potential of Suffolk, of what possibly could be,” Kris Brown said, “and then the networking — that’s really important to us, using local people and having that aspect of it.”