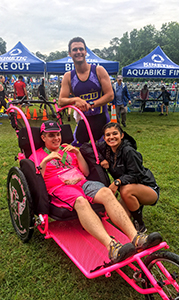 Racer with autism runs with friends

This August, Team Pretzel Hands will head to Virginia Beach for a day of running and surfing.

Ashton McCormick of Chesapeake and Jonathan Gajewski, both 20 years old, are preparing for the 15th annual Surfers Healing 5K run/walk on Aug. 17 at the Virginia Beach Oceanfront. Surfers Healing was founded by Israel and Danielle Paskowitz, whose son, Isaiah, was diagnosed with autism when he was 3 years old.

Like many children with autism, Isaiah often suffered from sensory overload, but the ocean was a place of respite for young Isaiah, according to surfershealingvb.org. The profound impact that surfing had on their son inspired the Paskowitz family to share this unique therapy with other children with autism.

They began hosting day camps at the beach where children with autism and their families could be exposed “to a completely new experience,” according to surfershealingvb.org. Proceeds of the 5K and “Lil Surfer Dash” benefit Surfers Healing Virginia Beach and the Autism Society, Tidewater Virginia.

Ashton, who has autism, has participated in this race since 2010, but hasn’t done it as a runner in four years, according to his mother Jennifer McCormick. He more often rides in his race chair with someone pushing him, often volunteers with Ainsley’s Angels of America.

But this race is very near and dear to his family, Jennifer McCormick said.

“For me, it’s a heartwarming feeling,” she said.

Last year, Ashton and Michael Davis, who is legally blind, made history in the 2018 Boston Marathon. They became the first team of a blind runner pushing a disabled athlete to finish the marathon.

Ashton and his team of friends and family adopted the name “Team Pretzel Hands” after his love of Rold Gold Tiny Twists pretzels, which he enjoys between his fingers during races.

He’s kept busy this year with races and training. He’s had a streak of riding on his exercise bike nightly since January, anywhere between 10 to 30 minutes, depending on how he feels, Jennifer McCormick said.

She said that Ashton has enjoyed the positive comments he’s received on the Facebook Live videos his mother takes of these sessions.

He also has surfing to look forward to right after he’s done with the 5K. It’s the one time of year that he surfs, McCormick said, and under careful supervision by volunteers.

She said the Surfers Healing event is like “Disney World for families with autism” — an event free of charge for these families, where they won’t face any judgment for outbursts from their children.

“There’s acceptance (and) there’s no judgment. He could have a meltdown, and no one on that stretch of oceanfront is going to care, because we’re all families that experience similar things,” she said.

Ashton will do this 5K with Jonathan and Jonathan’s girlfriend, Isabella Galvez. Ashton and Jonathan, who is a volunteer firefighter in Harrisonburg and nursing student at Blue Ridge Community College, have done nine races together so far this year and have four more to go by the year’s end, including Surfers Healing.

After each of their runs together, they like to go to Chick-fil-A. They tease each other like they’re brothers. Jennifer McCormick said Jonathan is basically Ashton’s older brother — even though they’re the same age.

“it’s funny when you see them together. They’re either racing or they’re eating, and that is no joke,” she said.

Many of these people already know who is Ashton is, and he thrives on that too.

“He thrives on people knowing who he is,” Jennifer McCormick said. “When I told him he was going to do an interview today, he said, ‘That’s a great idea.’”

Suffolk native Tonya Johnson continues to help people with their accounting needs. She does this through her own firm —... read more