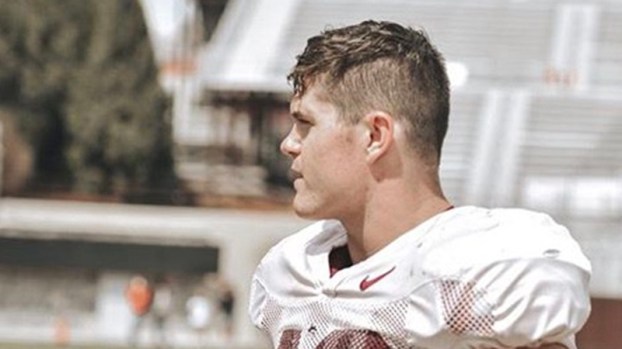 Daniel Griffith is ready to bounce back with Virginia Tech after a disappointing year in 2018. (Virginia Tech photo)

Griffith ready to bounce back with Hokies

After an underwhelming season last year, Daniel Griffith and the Virginia Tech football team are looking to bounce back.

The Virginia Tech football team went 6-7 last year, which is not typical. One of the losses was to Old Dominion University, which was so big it almost earned ODU an ESPY award for the biggest upset.

However, former Nansemond-Suffolk Academy standout Daniel Griffith is excited about the opportunity to bounce back with his team this season.

“We have a good team this season with excellent leadership,” Griffith said. “I am feeling confident in our guys this season, and the confidence is well deserved. Ever since the bowl game last year, we’ve been working really hard.”

Last year for Virginia Tech, Griffith saw action in 13 games, primarily on special teams as a linebacker. As a redshirt junior, he hopes to continue to evaluate his game with the goal in mind of making an impact each game on the field.

“I’m just looking forward to contributing to this team in any way that I can,” he said. “Whether it be on defense or special teams, it doesn’t matter to me. I don’t want to just contribute but to find a way to make a significant impact on the game.”

One thing Griffith is looking forward to is the rematch with ODU, which will take place Sept. 7. He does not want to overlook any opponents, as they open the season against Boston College before taking on the Monarchs, but he knows how important the ODU game will be to avoid a repeat of last season.

“We are taking everything one game at a time,” he said. “But obviously that game will be exciting for obvious reasons, and I’m looking forward to it.”

At NSA, Griffith helped the Saints to a state championship in 2015. Heading into his senior year, he was the No. 45 ranked player in the region.

The Lakeland High School tennis program will have a tennis camp July 31 to Aug. 2 for kids and adults.... read more