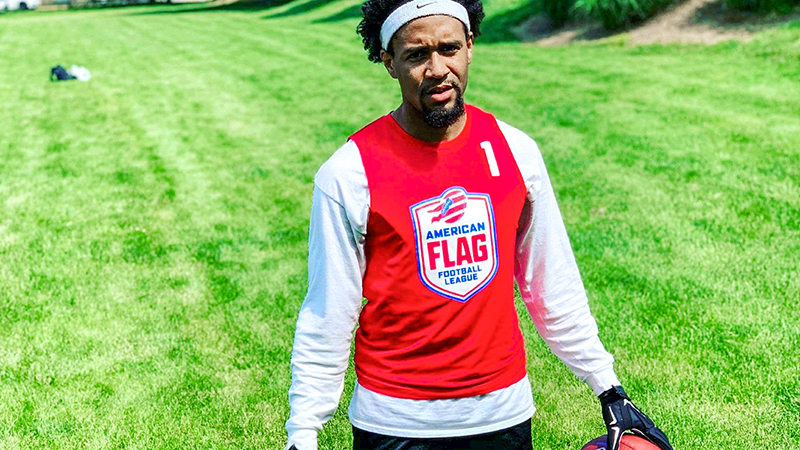 Suffolk native Kendrey Thurman is still pushing for his shot at the NFL. (submitted photo)

Suffolk native Kendrey Thurman is still working hard to pursue his dream of making the NFL.

Thurman, a graduate of Lakeland High School, just finished up his second year of arena football for the Carolina Predators. It’s all in the process of his dream of getting to the NFL.

Thurman has been pursuing his dream of making it into the NFL since he left Lakeland as a football standout in 2011.

After a solid but short career at Lakeland, Thurman didn’t go to play in college. He played semi-pro football in Hampton Roads right after graduating from Lakeland. He went on to play with other semi-pro teams along the East Coast before getting his shot at the American Arena Football League. He has played two seasons with the Predators and finished up his last season with five touchdowns in the last three games. There were some ups and downs, but overall, he felt good about his time there.

“Everything is well,” Thurman said. “Still just looking for that NFL shot, so it’s all about just continuing to grind until I get it. I have more footage out there, so it’s just about getting in touch with the right people.”

After he wrapped up his AAFL season, Thurman was offered a pro contract to go play in Palm Springs, Calif., which starts Aug. 20. Thurman wants to use that opportunity to get his name out there. Playing in California, he will be close to NFL teams Los Angeles Rams and Los Angeles Chargers.

While still on his journey, Thurman has been getting some support from Suffolk’s elite. He is connected with Sugar Rodgers, who plans on going out to support him at his tryout. He has also talked here and there with the Baltimore Ravens’ Chuck Clark throughout the years, as well as reaching out to others he knows in the Hampton Roads area. The advice and support he has gotten has been helpful to him, as it motivates him to see people from the city doing big things.

Even though the path he has taken to this point isn’t conventional, there are a lot of players in the NFL that have unique stories of how they got to that point. Thurman’s current path has motivated him.

“Everything going on is like a dream come true, but I still have a lot to prove,” he said.