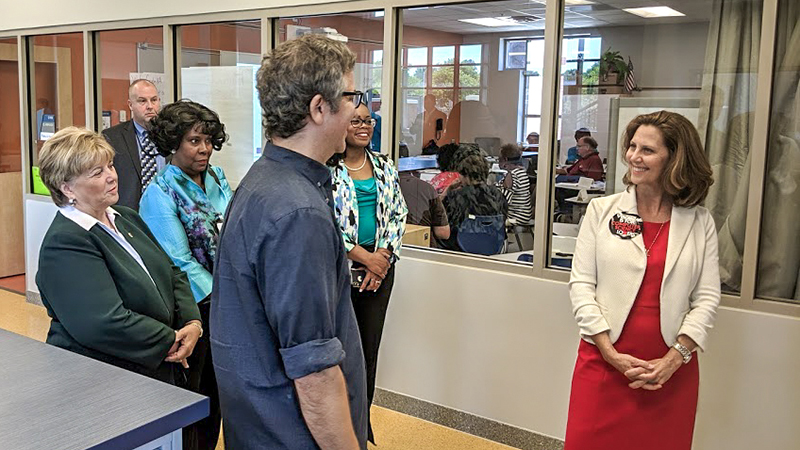 Virginia First Lady Pam Northam, right, speaks with CodeVA executive director Chris Dovi, as Mayor Linda Johnson, School Board Vice Chairwoman Dr. Judith Brooks-Buck and Superintendent-Designee Dr. LaToya Harrison listen. Teachers from across the region are at Col. Fred Cherry Middle School this week to learn principles of computer science and coding to take back to their classrooms and incorporate into their lessons.

Virginia First Lady Pam Northam paid a visit to Col. Fred Cherry Middle School on Monday to get a first-hand look at a program that prepares teachers to teach the principles of computer science.

Northam, chairwoman of the Virginia Science, Technology, Engineering and Math Education Commission, spoke with CodeVA and school officials, and she sat in on a lesson before speaking to educators during their lunch. She said it was fun to be in a classroom setting and engaging in some professional development.

“As an old science educator, it feels at home for me,” Northam said. “But it’s also really exciting to hear them speaking in language that we weren’t using very much 10 years ago. So talking about processing and algorithms and things you could work into the classroom and everyday life is very exciting and a lot of fun.”

Suffolk Public Schools is hosting CodeVA’s Tidewater region training for the second consecutive year, with 19 Suffolk public school teachers among the 147 educators attending one of the five of the organization’s trainings around the state. Last year, Suffolk hosted the program at Creekside Elementary School. The trainings give educators a week-long immersion into computer science and provide them with practical ways of incorporating its principles into their curriculums.

The Richmond-based CodeVA is an educational non-profit designed to promote computer science across Virginia, which was the first state in the U.S. to pass sweeping computer science education reform. The law mandates every Virginia child to have access to computer science literacy — including coding — throughout their schooling in order to ultimately build a more vibrant 21st-century workforce.

CodeVA Executive Director Chris Dovi said he appreciated Northam’s interest in the program, noting that more than 70 percent of STEM careers require computer science literacy. Some of those fields include aerospace engineers, environmental scientists, biologists, cancer researchers, and he said, even graphic artists.

“Computer science is our future,” Dovi said, “but it’s also our now.”

Northam said “superhero educators” are vital to getting information to their students.

“They have the courage, and the dedication, and the passion, to come and get all the training they need to really help our children and add to those 21st-century skills and jobs,” Northam said.

She toured the CodeVA workshop alongside Superintendent-Designee Dr. LaToya Harrison, School Board Vice-Chairwoman Dr. Judith Brooks-Buck and Mayor Linda T. Johnson. School Board member Sherri Story also paid a visit, as well as other Suffolk Public Schools officials. Northam later told a gathering of educators during lunch that she wants to see more girls enter STEM careers, and that it starts with their education through school.

Michelle Bailey, a business and keyboarding teacher at John Yeates Middle School, is one of those attending this week’s training and looking forward to incorporating what she learns into her classroom. She expects to return with exciting lessons on coding that she can teach her students.

“It’s coming up with something exciting for the kids,” Bailey said, “lessons that are going to make them say, ‘Oh, I want to take that class, I want to do that, I want to learn that,’ and maybe turn that into a career. Even when we teach the coding in keyboarding class, the kids will say ‘I don’t want to be a secretary.’ But keyboarding is not secretary (work). You learn so much, so, if they have a friend that says, ‘I’m taking keyboarding but we’re doing coding, and we’re doing such-and-such,’ they’ll say, ‘I want to do that.’”

Free carnival for a well-read community