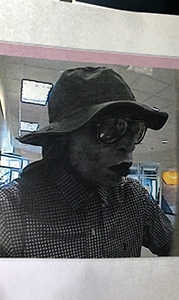 The robbery happened at 9:36 a.m. at the ABNB Federal Credit Union in the 5900 block of Harbour View Boulevard, according to a city press release.

Preliminary investigation found that a black male entered the business, provided a note to the teller and demanded money, the press release stated. The robber fled on foot with an undetermined amount of currency. There were no injuries.

The man was described as wearing a black and white checkered shirt and a floppy hat, as well as a white substance or make-up on his face, the press release stated. Suffolk Police released a still photo from the surveillance video.

Church cools off with community