Writers, fans turn out for festival 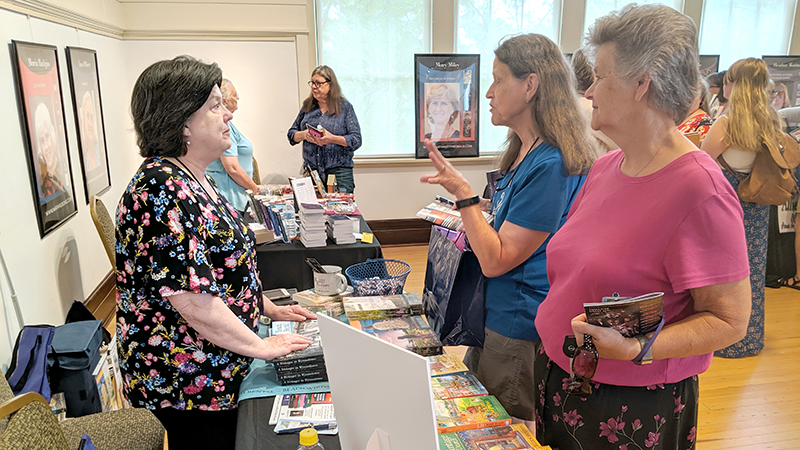 From the hospitality that authors rated as top-notch, to their accessibility for fans of the genre, the Suffolk Center for Cultural Arts was filled with people attending writing workshops and panel discussions, as well as fans getting to mingle with authors, who signed their books all afternoon.

Julie Hyzy, a Chicago-area author and New York Times bestseller who headlined the festival, was effusive in her praise of the event and of the city. Known in the genre for her White House Chef Mystery Series, Hyzy said she was unaware of the event until she received an invitation to headline it.

Hyzy, headlining a festival for the first time, took questions from author E.A. Aymar and the audience before heading out to her table to sign books.

“It was nerve-wracking, but it was a lot of fun,” said Hyzy, whose latest book, “Virtual Sabotage,” is darker and more of a thriller than her previous material.

Author Marni Graff, who returned to the festival for a second year, said the hospitality was key for her to return.

“It was really from the top down,” said Graff, the author of The Nora Tierney English Mysteries. “We were very well informed, we were well taken care of, we were fed very well and we were made to feel almost like we were pampered. It was just a very heartwarming experience, and you felt like the readers who were here were interested in crime writing.”

As someone who goes to three to four conferences per year, as well as touring the country to promote her books, Graff, who participated on a story setting panel during the festival, sees Suffolk’s event as a can’t-miss.

“Usually you go to these events and you show up and you drag your books,” Graff said. “But here, all the setup is done for you. Everybody has table space, they do a great poster with all of your book covers on it for all to see. It’s one of the best organized events I’ve ever seen.”

Women’s fiction and contemporary romance author Grace Greene said she enjoyed seeing familiar readers of her work. Margaret Dixon, who came to the event from Chesapeake with Brenda Godfrey, was one such person.

“It’s like no other reader-author event I’ve ever been to,” Greene said.

Judy Schubert, of Suffolk, was at the festival for the first time. She enjoys reading and wanted to meet the authors, picking up one of Barbara Early’s books, “Murder on the Toy Town Express,” specifically for her husband.

“My husband collects trains and has quite a layout, and the author told me what this is about,” Schubert said. “Somebody falls and they’re not too concerned about the man who fell. They’re more concerned about the expensive layout that he fell onto. It sounded interesting.”

Virginia Beach resident Ruth Brooks has been coming to the festival since its inception and loves the one-on-one time she gets with the authors. She said it’s like being among friends.

“I love being able to talk to the writers and have them discuss how they write books and their motivation,” Brooks said. “They’re all so personable. It’s wonderful being able to interact with them and you get a whole new approach to their book because you read it and you know who created this.”

Anna Marie DeHaven had a large selection of books with her — a bag she brought from her Poquoson home to be signed, and another filled with books she had bought during the festival. She reads cozy mysteries, a subgenre of crime fiction in which sex and violence is minimized or written about humorously. She likens such books to “watching a good show on (television) without violence, sex or gore, and it lasts longer.”

“I love this event,” DeHaven said. “They always get good authors. I brought this bag of books that I already owned to have these authors autograph them and to talk to them about their books. And then, of course, as many as I’m bringing, I’m picking up to buy more.”

The festival also featured panels on strong women in fiction and how to write suspense, as well as workshops on how to write a novel, publishing options once finished and short stories versus novels.

Marvin Jennings and his wife, Janis Jennings, of Grand Blanc, Mich., heard about the festival while staying at the Hilton Garden Inn Suffolk Riverfront and decided to drop by. The couple, who were in the area to watch a nephew be installed as a pastor in a Franklin church, each purchased books from different authors, one each for themselves and a couple for friends back home.

“It’s been a good experience,” Marvin Jennings said. “We didn’t know this kind of conference was even being held or staged. And now that we know it, it’s probably going to become one of our annual experiences.”