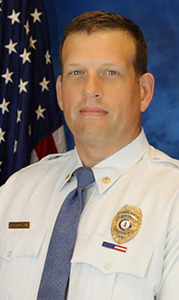 One of Suffolk’s deputy police chiefs moved a little ways west this week to become the new chief of the Franklin Police Department.

Maj. Steve Patterson has been in law enforcement for 27 years, and he said becoming police chief has been a career goal of his.

“I am doing this because it is my dream to be a police chief,” he said last week. “An opportunity has opened up that is close to my family and friends as well as professional contacts that I can seek guidance and advice from.”

Patterson started in law enforcement at the Western Tidewater Regional Jail. He spent two years there before moving to the Suffolk Police Department nearly 25 years ago.

He was on uniform patrol for three years and served on the drug unit for two years. In 1999, he became sergeant and went back to patrol, then went to the community improvement unit in 2003.

In 2004, he became lieutenant and did a year on the street and four years in the special investigations unit. He later made captain and served in the first precinct and investigations before being promoted to deputy chief three years ago.

As deputy chief, he has been in charge of all three divisions of the department — administration, investigations and patrol.

Patterson said he will miss the relationships he has built in Suffolk but will still be around the city often. He looks forward to new relationships in Franklin.

“I look forward to maintaining the friendships I have built around the region and building new partnerships with the citizens of Franklin,” he said. “I am excited about the future of Franklin and look forward to working with the residents and city management to continue to advance the city of Franklin.”

Patterson said he still will be involved in the Suffolk Ruritan Club and is thankful for the opportunities Suffolk has given him.

“I would like to thank the city of Suffolk for the opportunities I’ve been given,” he said. “I look forward to continuing my career as police chief in the city of Franklin.”