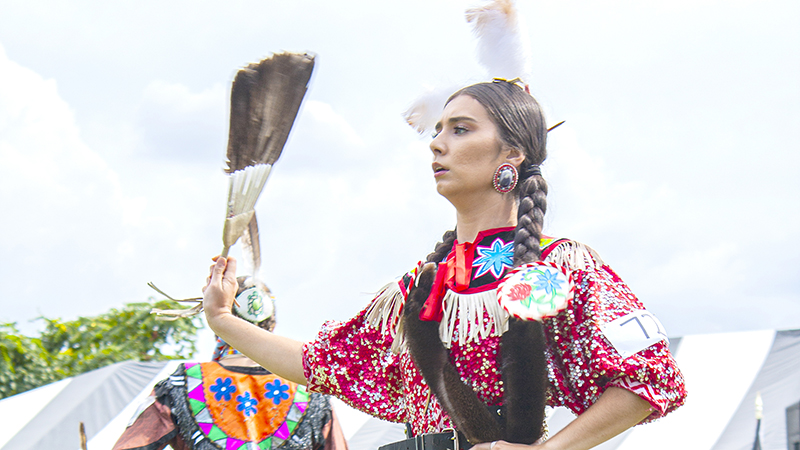 A woman dances during the Nansemond Indian Nation’s 31st annual powwow on Saturday at the nation’s Mattanock Town property near Chuckatuck.

The 31st annual powwow hosted by the Nansemond Indian Nation enjoyed robust turnout throughout the weekend despite high temperatures that curtailed some of the activities.

The traditional dancing ended slightly early on Saturday due to the effects of the heat, but the powwow still welcomed thousands that day as well as Sunday.

“It just keeps growing,” said Nikki Bass, a tribal council member. “I know it’s hard to be in the heat, but people keep showing support, and we love it.”

Regular attendees and first-time visitors enjoyed traditional dancing by dancers in colorful regalia, led by Daniel Gear Jr. and Leah Fortune, moving to the beat of drum groups, Stoney Creek and War Paint. The public was invited to join in for some dances, including the children’s candy dance.

Visitors could get food from a number of vendors and browse the art show, shops selling traditional crafts and more. They were able to visit a petting zoo by Dobbins Mini Petting Farm, see inside a replica of an authentic Nansemond dwelling called a yehakin, and learn about how Eastern Virginia Indians made their own materials and tools for hunting, clothing themselves and keeping warm.

“I think the most important thing is to talk to people,” Nikki Bass said. “Meet people. Learn about what people are doing here. There’s a lot of attention on the people in the dance arena, but go and talk to everybody. You’ll find some treasures out there.”

Desmond Ellsworth, who was attending his first powwow since becoming a member of the Nansemond Indian Nation, managed the art show.

“It’s a lot of work being a member and helping the powwow succeed,” he said. “Things I didn’t expect.”

The art show brought in entries from the Nansemonds as well as Osage, Cherokee, Mattaponi and Nottoway, he said.

Ellsworth attributed the large attendance to greater connections in the community.

“The word is getting out, and people are more interested in native culture now,” he said. “And the tribes are interacting with each other more.”

Many at the powwow are Nansemond members or related to the Nansemonds in some way. Tatanka Gibson, a citizen of the Haliwa-Saponi nation who also counts Nansemond in his heritage, came and brought his family.

“I’ve been coming to the Nansemond powwow since I was a little kid,” he said. “A lot of my family is here. The people are great. The place is great.”

For some others, they are not related to the Nansemonds or other tribes, but they enjoy coming to learn.

“I really like the powwow,” said Saleya Scales, 9, who got her grandmother to bring her for the second consecutive year. She said her favorite part was the dancing.

Sandro Villarroel said he was attending his first powwow after coming across videos about powwows on YouTube and becoming interested.

“I connected with the sound of the drums,” he said, adding that he drove all the way from Fairfax to attend the Nansemond powwow. “I love it.”

At the event, the Nansemond Indian Patriots Chapter of the Sons of the American Revolution increased its membership to 25 with the induction of Keith Anderson and Kalen Anderson. About 17 of the members are of Nansemond heritage, said Secretary Joe Vermaelen, and it is the first predominantly Native American chapter of the organization.

Nansemond Chief Sam Bass said he was “elated with the attendance and the people.”

“I believe the citizens in the region are interested, and based on what they have heard, they want to come see for themselves,” he said.

Bass thanked the city of Suffolk for its assistance in putting the event on, as it does every year.

Nikki Bass added that partnerships, with city agencies as well as other community organizations, are growing.

“It’s really blossoming into more and more partnerships throughout Suffolk,” Nikki Bass said. “We have recycling for the first time this year. Kathy Russell helped with that, and I feel really grateful for that. We want to increase our engagement with the tribal community but also with the Suffolk neighbors that we have.”