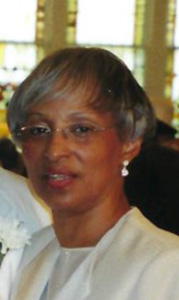 Marvia Loray Cherry Goode was born Dec. 20, 1942, in Nansemond County (now Suffolk), the oldest surviving child of the late Jessie Lee and Virginia Mae Boone Cherry; the cherished grandchild of Byrum Simpson and Essie Emma Walden Boone; and the beloved great-grandchild of Titus LeGrant and Mary Catherine Johnson Walden — all of whom were bedrock members of Mount Sinai Baptist Church. When she was 12, attending the annual August revival, she accepted Christ under the pastorate of the late Rev. Galvin Rawleigh Daughtrey.

Marvia attended Jordan Kindergarten, Andrew J. Brown Elementary School, Nansemond County Training School, and Southwestern High School, where she graduated as salutatorian in 1960. After earning a Bachelor of Science in elementary education with a minor in history from St. Paul’s College in Lawrenceville, she was employed by Southampton County Public Schools as a kindergarten teacher, and later, for five years, in Richmond Public Schools as a sixth-grade teacher. Trying to fulfill her dream of becoming a daycare director, she earned a Master of Education in early childhood development from the University of Virginia. She accepted a position as educational director for the Salvation Army Day Care Center in Brooklyn, N.Y., and for more than 10 years she served countless children age 3-5 and worked with a staff of dedicated teachers, a family counselor, nurse, bookkeeper, cooks and custodians.

In August 1971, she married Florida native, Joseph Eubanks. The couple had one daughter, Tara.

Marvia eventually returned home and reunited with Southampton Public Schools as a kindergarten teacher, an adult education instructor, and a summer school teacher. She retired after 42 years of direct teaching and an additional five years as an in-home counselor assisting students and parents to mend behavioral problems.

In October, 1985, she was one of the charter members of the local chapter of The Links, Incorporated. Among her many facets during 34 years of service, she worked diligently with Service to Youth, Membership, and Fundraising, as well as Christmas celebrations.

Her service to her church is a testament to both her upbringing and her faith. She shared with us that she was taught to always say, “Yes,” when asked to help in church. In addition to being a deaconess, she was assistant superintendent for the church school, director of Vacation Bible School, president of the Missionary Ministry and chair of the Scholarship Ministry. She was also a member of the Christian Education Department, Church Trips Committee, the Christian Women’s Fellowship, and the Sidney N. Rawls Sr. Seminarian Committee.

Brought together by their mutual dedication to Christian service, she was blessed to find love and companionship in her senior years with her marriage to the Rev. Dr. Joseph H. Goode Jr. in 2004.

One of Mrs. Goode’s most rewarding accomplishments was her service as the seventh president of The Women’s Division of The Bethany Baptist Association from October 2014 to July 2017. Her community affiliations included life membership in the NAACP, Golden Life Membership in Delta Sigma Theta, Incorporated, and the Franklin-Southampton Retired Teachers Association.

On Monday, Aug. 19, 2019, she was suddenly led to heaven by her Saviour and welcomed into the arms of her parents and other loved ones. To celebrate her life are her husband, the Rev. Dr. Joseph H. Goode; one daughter, Tara E. Belle (Jamesritch), of Woodbridge; one brother, William Cherry, of Atlanta, Ga.; two granddaughters, Summer Hawes and Brielle Belle, of Woodbridge; a lovely blended family of two sons, Kenneth Goode (Myrtle), of Richmond, and Kelvin Goode, of South Chesterfield; two daughters, Shena Goode, of Petersburg, and Sandra Tucker (Lloyd), of South Chesterfield; a loving, devoted friend and “cousin,” Sarah Jean Walden of Suffolk; and a host of extended family and those who will keep her in faithful memory.

Viewing will be held at 5 p.m. Friday, Aug. 23, 2019, at Mt. Sinai Baptist Church, 6100 Holy Neck Road, Suffolk, VA 23437. The Delta Sigma Theta, Incorporated will have an Omega Omega service at 6:30 p.m. followed by the Links Incorporated Memorial Service. She will be laid to rest in the church cemetery. The Rev. Dr. William L. Lang will deliver the message of comfort. Professional services with dignity have been entrusted to Crocker Funeral Home Inc.