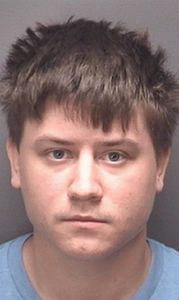 A Suffolk man has been charged with four felonies after an investigation that started on Sunday.

Nicholas John Butler, 21, was arrested Monday and charged with four counts of carnal knowledge of a child 13 to 15 years old, according to a city press release. He is being held at the Western Tidewater Regional Jail.

The investigation remains ongoing, and additional charges may be forthcoming.