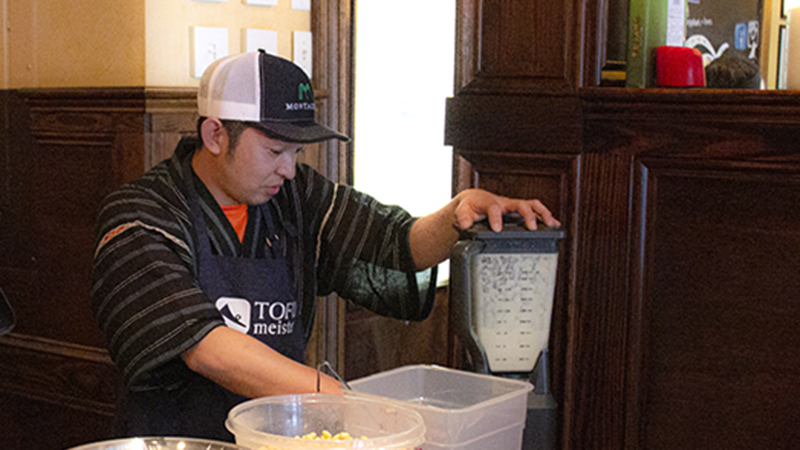 Kazutaka Itami pours in water to blend with soybeans during a June 15 demonstration on tofu-making at Suffolk’s Sushi Aka on West Washington Street. Itami won a national tofu-making contest in Japan with a special variety of soybeans grown in Virginia. (Troy Cooper photo)

Global influence of Suffolk’s agriculture and food scene has been growing in recent years.

A prime (and tasty) example? Soybeans grown in Suffolk and Isle of Wight County recently produced a tofu that won a national tofu competition in Japan.

Tofu is important to Kazutaka Itami, the Japanese chef who won the competition with the tofu produced from a special variety of soybeans grown here.

Itami, 39, has been a chef for 18 years, following in his father’s footsteps. In an email exchange translated by Michiya Hirano, he said tofu has a long and significant history in Japanese cuisine.

Tofu-making was first recorded in China more than 2,000 years ago, according to a history of tofu at soya.be. Kento priests who went to China to study Buddhism reportedly brought tofu back to Japan during the Nara era (710-794), according to the article. The word “tofu” was first mentioned in Japan in the diary of the Shinto priest Nakaomi. It was an important part of priests’ vegetarian diets for the protein, the website states.

These days, Itami said, Japanese tofu plays a role in everything from high-end dining in Kyoto to an economical staple in more rural areas. Tofu is eaten plain or in other recipes, where it tends to take on the flavors surrounding it.

Itami said U.S. soybeans have been supplied more sustainably and cheaper than Japanese ones, and they also have a higher protein and oil content, which helps the texture and flavor of the tofu.

Enter Tom Taliaferro of Montague Farms, based on Virginia’s Middle Peninsula. The farm has a “typical” family farm that grows corn, barley, wheat and soybeans. But it also has specialty soybean varieties it has produced through a partnership with Virginia Tech’s soybean breeding program, and it contracts with growers throughout the Mid-Atlantic — including in Suffolk and Isle of Wight — to grow them.

“One of the new varieties that came out of Virginia Tech is a very large, high-protein variety,” Taliaferro said. “We introduced that to some of our customers in Japan two or three years ago.”

It became very popular, and one of Taliaferro’s customers asked Itami to enter the national tofu competition using the Virginia-grown soybeans, Taliaferro said.

“The specific soybeans that won the competition were grown in Isle of Wight by Ken Edwards,” Taliaferro said. “This year, we have production in a number of different places, to include Suffolk.”

Taliaferro said his customers report this variety of soybean — named Hanamizuki Momen, after the Japanese word for “dogwood,” the state flower of Virginia — produces a better flavor and a brighter, whiter tofu, which is desirable.

“The size also helps,” Taliaferro said. “The less skin you have and the more internal soybean content, the greater the yield out of the tofu.”

In June, Itami traveled from Japan all the way to Suffolk to do a tofu-making demonstration at Sushi Aka on West Washington Street. He blended pre-soaked soybeans to get soymilk, added coagulant and pressed the soy curds into bricks of tofu.

“The artistry, to me, is related to the addition of the coagulant, the temperature in the soymilk, the timing, the speed, how long you circulate it — all of that is really the artistry of the tofu making,” Taliaferro said.

He said the idea of his soybean variety winning a Japanese tofu competition — plus a photo of Japanese schoolchildren eating tofu from his soybeans — was fulfilling for him.

“It truly brings home that we’re not in the commodity business; what we do is providing a food product,” Taliaferro said. “It’s easy to lose sight of that in an export market where you close the container doors and the product is gone.”