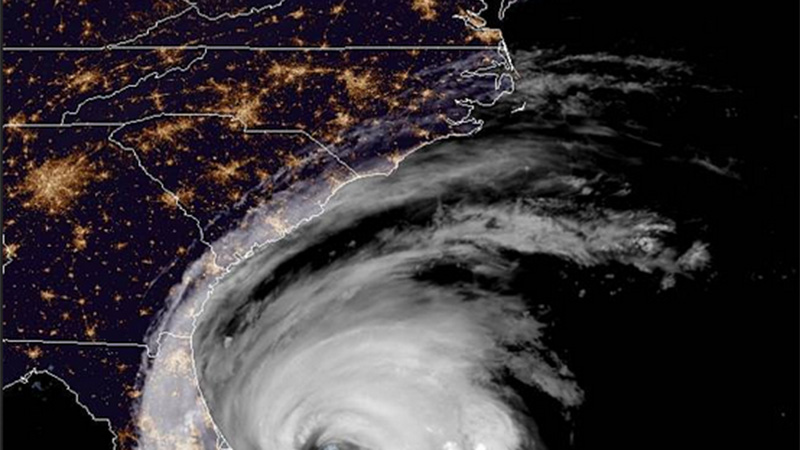 Suffolk is under a tropical storm watch as Hurricane Dorian moves toward the Outer Banks of North Carolina.

Suffolk is under a tropical storm watch as Hurricane Dorian moves northwest toward the Outer Banks of North Carolina.

The tropical storm watch issued by the National Weather Service is in effect from the North Carolina-Virginia border north to Chincoteague, and for the Chesapeake Bay from Smith Point south. A tropical storm watch means that tropical storm conditions are possible within the watch area, generally within 48 hours, according to the hurricane center.

This comes after Virginia Gov. Ralph Northam declared a state of emergency Monday. The Suffolk Fire and Rescue Office of Emergency Management reminded residents to take appropriate steps for emergency preparedness due to the threat and potential impact of Hurricane Dorian.

The Virginia Department of Emergency Management said it has growing confidence that southeast Virginia will see direct impacts from Hurricane Dorian as early as Thursday, with those likely coming later in the day through Friday, according to city officials. The hurricane has grown in size, according to the National Hurricane Center, with hurricane-force winds extending outward up to 60 miles from the center, and tropical-storm-force winds extending up to 175 miles.

There’s potential for major coastal flooding of three feet or greater. The wind field will expand significantly as the storm moves north, and gusts of 60 miles per hour or greater are expected along the coast, according to the city.

Rainfall amounts are currently forecast in the range of four to six inches, with some areas reaching seven inches or more, and there’s a flash flood threat Thursday night and Friday. Increasing winds are also a probability, with Hurricane Dorian’s effects fading Friday afternoon into the evening.

“(We’re) still looking at some really gusty winds, especially close to the shore there,” said Chris Fisher, meteorologist at the National Weather Service office in Wakefield, “and there will be periods of heavy rain and there could be some coastal flooding, basically right there along the coast, and also portions of the southern bay as well.”

While no evacuation has been ordered in Suffolk, officials recommended that residents, especially those in evacuation zone A, stay alert to the latest forecast while preparing their homes, businesses and family members in the event of an evacuation.

Virginia’s Know Your Zone evacuation initiative is designed to let Coastal Virginia residents know what areas are most vulnerable to hurricanes. The information is based on each resident’s physical address that can be obtained by visiting knowyourzoneva.org for a detailed, interactive, color-coded map showing each evacuation zone. Those that do not have access to a computer or internet service may instead call 2-1-1.

“While we are currently experiencing ‘blue skies,’ the time to act is now as it relates to making sure you have your emergency kit prepared with sufficient supplies,” according to a city news release.

Supplies include food and water for each family member for at least five days; vehicles fueled and ready; loose and lightweight objects secured or brought indoors, such as patio furniture and bicycles; items unsafe for indoors like gas grills and propane tanks anchored; damaged tress and limbs that are close enough to fall on structures trimmed or removed entirely; loose gutters and downspouts secured, and any clogged areas or debris cleared to prevent water damage.

In addition to preparations being made by the city and by the Virginia Department of Transportation, the Army Corps of Engineers released water from Lake Drummond by seven inches below normal to prepare for any additional rain, and the Norfolk District activated its emergency operations center in Richmond.

The Norfolk District is also moving its vessels into safe harbor at the Great Bridge Locks reservation, with both Norfolk and Wilmington District vessels moored there until the storm passes.”

As of 5:45 p.m. Tuesday, Dorian was about 650 miles south-southwest of Norfolk., moving northwest at six mph with maximum sustained winds of 110 miles per hour.

Hurricane Dorian’s core is expected to move close to the Florida east coast and the Georgia coast through Wednesday night, and is currently forecast to move near or over the coast of South Carolina and North Carolina Thursday through Friday morning. It is expected to remain a powerful hurricane during the next couple of days.

On Tuesday, Port Condition X-ray was set for the Port of Virginia due to the predicted, sustained tropical storm force winds of Hurricane Dorian within 48 hours, according to a Tuesday press release.

All commercial ocean vessels and barges greater than 500 gross tons should make plans for departing Virginia ports, according to the press release. Owners of pleasure craft are advised to closely monitor weather reports and seek safe harbor well before storm conditions arrive on Thursday.

Drawbridges may not be operating if sustained winds reach 25 miles per hour, or when an evacuation is in progress.

“If port conditions are elevated as tropical storm force winds approach, vessel movements will be restricted, and all movements must be approved by the (Captain of the Port),” according to the press release. Visit homeport.uscg.mil/port-directory/hampton-roads for more information.