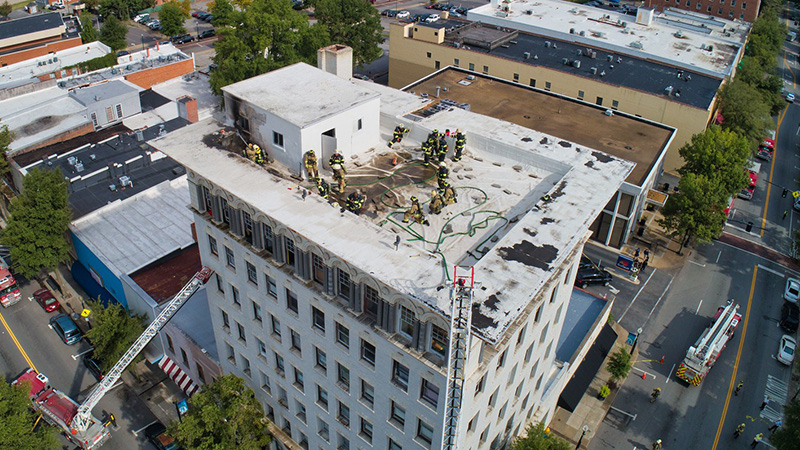 No one was injured following a fire to the roof of Tower 112 building in downtown Suffolk Wednesday morning. Though the fire was contained to the roof, the seventh floor sustained water damage and several floors sustained smoke damage, according to Battalion Chief William Kessinger. (City of Suffolk photo)

The first units arrived on the scene of the three-alarm fire at 9:25 a.m. and the fire was called under control at 10:02 a.m. There were no reported injuries, according to the city press release.

The fire was contained to the roof, but the seventh-floor sustained water damage and several floors sustained smoke damage, according to Battalion Chief William Kessinger.

According to the press release, Tower 112 is classified as 10 stories due to its height, but the building is actually seven stories with a basement and mechanical room on the roof.

Residents were stunned by the fire at the downtown landmark.

Mia Byrd lives across the street from Tower 112 on West Washington Street. She was alerted when she heard emergency vehicle sirens blaring, then she saw the fire on the roof of Tower 112 from her window.

“I saw flames coming out of the roof,” Byrd said.

She then saw Suffolk Fire and Rescue crews put out the flames.

“They put it out very quickly, from the time that I could hear and see the fire trucks on my street, to when I could see them put it out from my window,” she said.

Angele Hillard and Katina Faulk are both Suffolk residents who work in the Divine Home Care LLC office on the sixth floor of Tower 112. They arrived for work just after 10 a.m. to find the streets closed off and filled with emergency crews.

Hillard and Faulk have worked in the office since 2017, and the two women have lived in Suffolk for decades. Neither of them had ever seen anything quite like this downtown.

“They’ve pretty much shut traffic down and stuff,” Hillard said. “It’s crazy. We’ve never seen anything like this before.”

The investigation into the cause of the fire is ongoing.