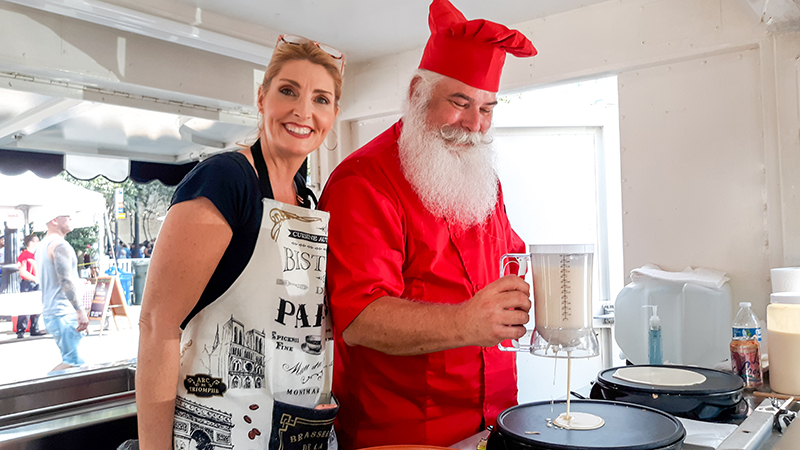 Kris Brown and Kenny Hydock make crepes during Saturday’s Taste of Suffolk event. Brown, one of the owners of The Pinner House, said the event had been great exposure for the new boutique bed and breakfast.

The 13th annual Taste of Suffolk event went off without a hitch on Saturday, a day after Suffolk saw effects from Hurricane Dorian.

After the storm came and went and caused little damage in Suffolk, the city made the decision to go ahead with the event, and plenty of people were pleased.

“It had always been anticipated that Saturday’s weather would be OK,” said Emily Upton, special events coordinator for the Department of Parks & Recreation. “We just figured we’d play it by ear with how unpredictable the storm had been. A lot of people commented it was a nice way to get out of the house after being cooped up all day Friday.”

Eighteen restaurants came and dished out single-serve offerings from their regular menus as well as special creations. A number of other vendors were also on hand, and there were  children’s activities, new vehicles on display, a Suffolk Master Gardeners gardening expo and live entertainment.

“We like to see what different restaurants in Suffolk have and try something different,” said Alton Knight, who visited the event.

“We like to eat and catch up with old friends,” Belinda Williams added.

Restaurant owners were appreciative of the event, with some of the newer eateries particularly thrilled about the chance to get their name out there.

“We’re almost sold out,” said Tonya Batten, one of the co-owners of Ryan’s Steaks and Cakes along with her brother, Ryan Byrd. “We appreciate everybody’s love and support. It’s a great thing for business owners.”

As she flipped funnel cakes in the fryer, Batten said many people who hadn’t yet heard of the restaurant had found out about it thanks to the event.

Kris Brown of The Pinner House also said more people had learned of the new boutique bed and breakfast and event venue at Taste of Suffolk. She filled crepes as her “Chef Santa,” Kenny Hydock, made the pastries.

“It’s been great,” she said. “We just have become part of the downtown community. There’s lots of good food here, and everybody is excited.”

Upton said the event changed this year to keep the entire thing on Main Street, rather than spreading down side streets, and it added a more cohesive feel.

“The look of it this year seemed more festive,” she said.

Folks also enjoyed the beer and wine garden and the afterparty with football games on the screen, she said.

“There really was something for everybody at Taste of Suffolk this year,” she said. “We were happy to have the citizens from not only Suffolk but also from all over Hampton Roads come and see what’s so great about Suffolk.”