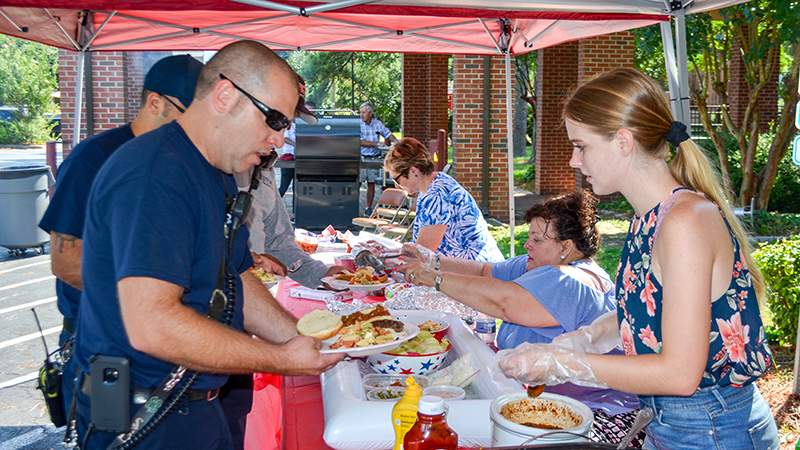 Suffolk Christian Church on North Main Street recognized local first responders on Wednesday in remembrance of those that gave their lives on Sept. 11, 2001.

Church members held a Sept. 11 cookout for Suffolk first responders on the church’s north lawn. Members donated favorites like baked beans and more to go with hamburgers and hotdogs from the grill, plus delicious desserts that members made themselves.

“We’re very proud of all of our first responders, and it’s a real privilege for us to be able to honor and serve them with this cookout,” said Pastor Michael D. Halley.

Suffolk Police, Sheriff’s Office and Fire & Rescue personnel got generous servings of food from 11 a.m. to 3 p.m. Wednesday, courtesy of the citizens they serve each and every day.

Priscilla Bunch, the children, youth and adult director for Suffolk Christian Church, said that the congregation was pleased with the turnout.

“We were so excited when we saw the first fire trucks show up,” Bunch said.

The cookout was another showing of the Suffolk community’s strong bond with its first responders, who sat together at tables and talked between bites.

“I think it’s a very good relationship,” said Claudia Salmon, who worked for the city of Suffolk for 34 years and for Suffolk Fire & Rescue for 12 years. “They’re able to work well together. Police and Fire are responsive to their citizens, and they do what they can for each other.”

These men and women who served were treated to this cookout on the national day of remembrance for the people killed in the Sept. 11, 2001 attacks. The attacks killed approximately 3,000 people in New York City, at the Pentagon and outside of Shanksville, Pa.

According to the Uniformed Firefighters Association, as of Wednesday approximately 204 Fire Department of New York men and women have died from World Trade Center-related illnesses from chemical exposure they suffered responding to the attacks. About 241 NYPD officers have died of related illnesses.

These men and women will never be forgotten.