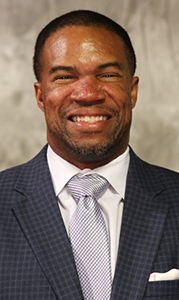 Dr. John B. Gordon III, who most recently served as chief of schools in Chesterfield County, has been named the new Suffolk Public Schools superintendent.

“I’m so excited to get started,” Gordon said at Thursday’s School Board meeting following a unanimous vote of the board to appoint him to the position. “Suffolk is a great, great school division. This is a dream come true. It’s an outstanding opportunity (and) I’m so happy to be a part of the team. I’m really looking forward to getting started.”

He succeeds Dr. Deran Whitney, who announced his retirement April 11.

Board Chairwoman Phyllis Byrum said she spoke with Gordon, who was one of seven candidates interviewed, numerous times and noted how he shared his excitement about being selected to the position. She noted his determination and said she emphasized to him that she wanted to see his vision.

“When I called him to tell him the decision of the board, he was much excited,” Byrum said. “He said, ‘You made my day, my week, my year.’ He was very excited. His mother would be very proud to hear that. And he said, ‘I think when I get off the phone I’m going to do a somersault. I’m just overjoyed. I don’t know what to say.’”

Gordon has served in Chesterfield since 2017. During that time, its school division reached 100 percent accreditation each year. He led in the development of that division’s Administrative Lead Program and the creation of its Leadership Framework.

Dr. Judith Brooks-Buck, in praising Gordon, is confident he will do great things for the school division.

“We have a great team backing you up, and we know that you understand the notion of team and you know how to bring the best out of those who work with you,” Brooks-Buck said.

Gordon previously served as the director of administrative services for Fredericksburg City Public Schools from 2014 to 2017. In that role, he is credited with bringing the International Baccalaureate program, and led efforts to renovate the Walker-Grant Center, in a building that was the city’s first high school for African American students prior to desegregation. Prior to that, Gordon was the principal of James Monroe High School in Fredericksburg from 2009 to 2014.

Gordon is also the author of the book, “The Teacher’s Lounge: The Real Role of Educators in Your Schools,” and is the president of Schools That Inspire LLC, an educational consulting firm.

Other board members were effusive in their praise of Gordon, who brought his mother, wife Shavonne and two of their three children — Kennedy, 15 and Simone, 10 — with him to the meeting.

“We had a tough choice,” said board member David Mitnick. “Suffolk had drawn a lot of attention during this superintendent search, and Dr. Gordon, you rose to the top, the cream of the crop, and for that, we are so thankful that you agreed to come to be our next superintendent.”

Mitnick noted a particular detail that set Gordon apart from other candidates.

“When he came into his interview, he handed each of us a booklet where he had taken our strategic plan and had gone through it objective by objective and had planned out what needed to be addressed and who was going to be responsible, and what he could add to each of the items. It impressed us that he had taken the time to do that, which kind of speaks for the level of the person that we’re getting.”

Gordon, in a statement, said he was honored to be chosen as the new division superintendent.

“Suffolk Public Schools is an excellent school division that works very hard to support all students and help them reach their goals. I am so lucky to work with a collaborative school board, dedicated teachers, outstanding students and great leaders that have led the school division to 100 percent accreditation.

“It is my job to inspire our school division to reach new heights, and to ensure that all students grow and reach their potential.”

Board member Tyron Riddick believes the choice of Gordon will keep Suffolk Public Schools on an ascending track.

“With your vision that you have, I know the sky’s not the limit,” Riddick said. “We’re going to the moon, and we’re going far beyond that.”