Warriors, Bulldogs and Cavs back in action 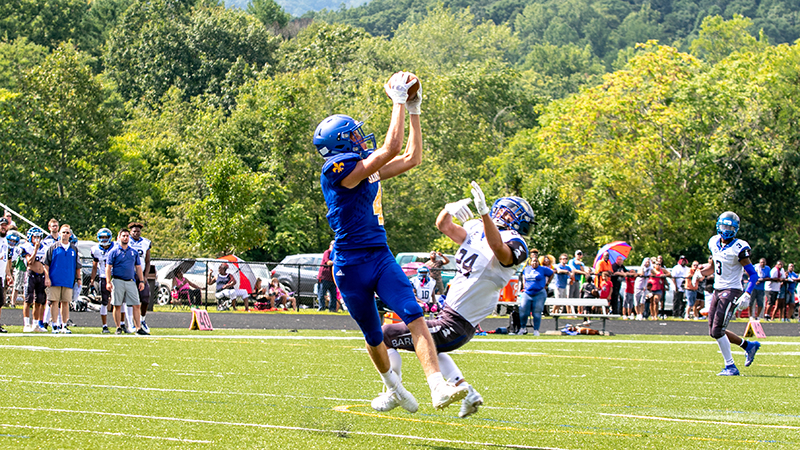 The Saints will have their first home game of the season Friday night when they take on Isle of Wight Academy. (Chris Dailey Photo)

After spending the last week on a bye, the three Suffolk Public Schools get back in action this week, along with the Saints’ first home game.

The Bulldogs will have their home opener against a quality opponent this Friday. They will take on an Indian River team that is the reigning Southeastern District champion. It will be a tough matchup for the Bulldogs, but they have had more than 10 days to prepare for the matchup.

The Bulldogs are coming off of a strong win against Smithfield High School to open the season. The defense put on a strong performance, shutting out Smithfield, and will have to be just as good or better against a high-power Indian River group.

King’s Fork will take on Indian River at home at 7 p.m. Friday.

This game will be the most interesting of all the action of the Suffolk schools this week. The Cavs march into Tigers territory on the road, a place all too familiar to Lakeland head coach Joe Jones. Jones was the defensive coordinator at Oscar Smith as recently as last season but was hired as the new coach for the Cavs when Kevin Knight stepped down.

Jones has mentioned that preparation has gone well for the Cavs this week as they look to pull off an upset.

“We had a week off to get some guys nice and healthy and getting acclimated with both school and football being back,” Jones said. “The kids know what we are up against in the type of opponent we are playing. We have to make sure we are executing on all cylinders this week.”

Jones has stressed this week to his players to have a big game mentality. It’s a big opportunity for the Cavs to come away with an upset. Lakeland will need great offensive line protection if they want to be successful Friday night. Jones believes the offense has been gelling and is headed in the right direction. They didn’t give up a sack in the first game against Wilson High School. Lakeland coaches have also stressed that the team knows how important it is to know its assignments for Friday night.

Lakeland will be at Oscar Smith at 7 p.m. Friday.

The last two losses for NSA have been by one score or less. But the Saints are happy to be back home to get a chance to bounce back.

“We are excited to play at home against an opponent that’s right down the road,” Coach Mike Biehl said. “I think it’ll be a good matchup between both teams, and we are looking forward to it.”

Nansemond River will have its home opener against Western Branch in what should be a game with a lot of familiarity. Most of the Warriors coaching staff played at or coached for Western Branch in the past, most notably Coach Justin Conyers, who is a graduate and spent time coaching there for a bit. Offensive coordinator Lew Johnston was a long-time coach at Western Branch.

Even though the Warriors will be heavy favorites in this game, they know how important it is not to overlook an opponent.

“I tell the guys all the time we take things one day and one game at a time,” Conyers said. “We don’t want to overlook anyone. We see Western Branch like the other 10 teams on our schedule we have to beat if we want to get to where we want to go.”

Bulldogs fall in four to Churchland