Warriors go to 2-0 on season 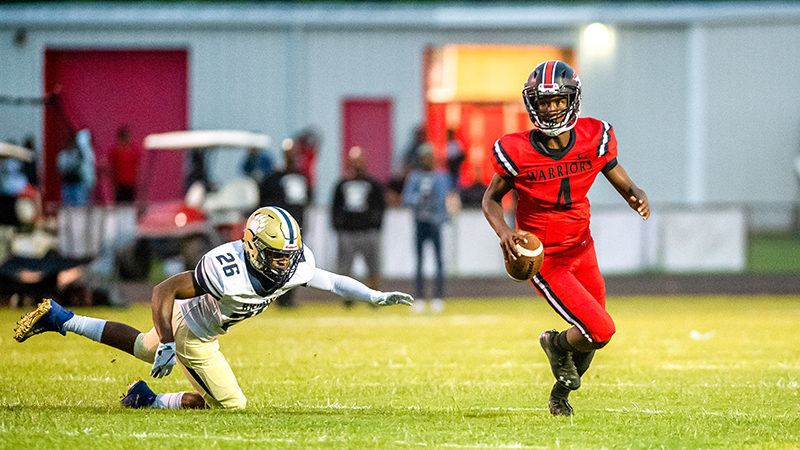 The Nansemond River High School football team put on a dominant performance last Friday, going to 2-0 on the season.

In the Warriors’ home opener, they hosted a Western Branch High School team that came in at 0-1. Nansemond River opened the game with an 8-0 lead after one quarter of play. Each quarter of the game, the Warriors seemed to have taken their play to the next level. They put up 22 points in the second quarter to take a 31-6 lead and continued to build on that in the second half.

“We felt good about the performance, and we feel good about being able to get a win,” Warriors Coach Justin Conyers said. “We have seen progress from game to game.”

In the first two games, Nansemond River has outscored opponents 95-24. X’zavion Evans picked up where he left off in the opener by rushing for 160 yards and two touchdowns. Freshman quarterback Nolan James went 4-10 for 67 yards and had four total touchdowns, which included one rushing. Mar’keese Greene was on the receiving end of the three touchdown passes James threw, as he totaled 67 yards receiving. Brent Stratton added six carries for 63 yards and added a 90-yard kick return for a touchdown.

“It’s very important for us to focus for this week, because they are the reigning district champions,” Conyers said. “They have played in multiple region championship games, so they have definitely earned their respect. This game will have big implications for the playoffs and for the district, so we believe we will be ready.”

Nansemond River will go on the road to take on Indian River.

Brown-Mayfield steps up for Lady Cavs