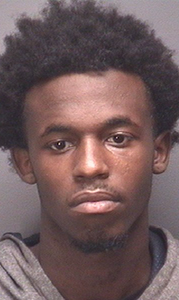 Suffolk Police on Friday arrested a King’s Fork High School student in connection with an alleged verbal altercation on Thursday, also alleging that comments the student made fueled social media posts and rumors about a threat to the school.

Jalen Parker, 18, is charged with threaten bodily harm and disorderly conduct, according to a city press release. He was processed at Western Tidewater Regional Jail Friday.

Police and school officials stated Friday that there was never a credible threat to the school and its occupants. They encouraged parents to talk with their children about notifying adults when they know of potential threats.

According to the city press release, Parker allegedly had a verbal altercation with a teacher on Thursday.

“During the altercation, the student/offender threatened the teacher and other staff with bodily harm,” the press release stated. “The investigation further revealed that the student/offender’s comments fueled the social media posts that prompted the enhanced security at King’s Fork High School.”

The student in question was not at school Friday, school division spokeswoman Bethanne Bradshaw stated on Friday afternoon. Police, according to Bradshaw, had detained him for questioning at his home.

Police and school officials never said there was a threat to the school, and the Suffolk Police Department not only enhanced security at the school but also took to Facebook about 10:30 a.m. to reassure the community that there was no active threat.

Still, many parents picked up their students from the school throughout the morning as various rumors spread like wildfire.

Catherine Dillard, the mother of a freshman and a junior at King’s Fork, came to pick up her daughters out of an abundance of caution.

“I just wanted to be ‘(better) safe than sorry,’” she said. “It seems like everything’s OK now.”

Leviticus Turner had a similar train of thought when coming to pick up her daughter, a sophomore. “It’s a heightened awareness because there’s too much going on in schools around the country, so I’m just not going to take any (chances),” she said. “She wanted to be picked up, so I came to get her.”

“While I know students and families were extremely worried, at no time were our students and staff in danger,” he wrote. “We shared this information using our automated phone and email system as soon as we had credible, verified information from the police to share. “Please discuss with your child the importance of notifying a teacher, administrator or staff member when he/ she knows of a situation that could threaten student safety,” he added. “If something needs to be reported after hours, please call the police.”

Bradshaw said verified data on absences and early dismissals would not be available until Monday.