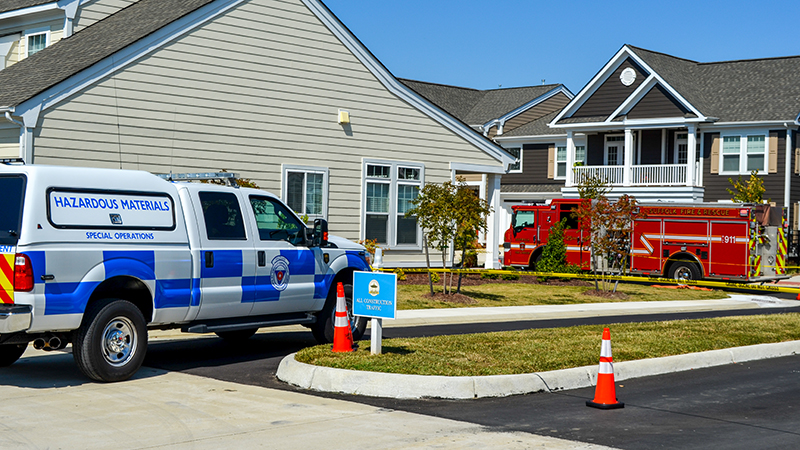 Emergency crews responded to the discovery of an unexploded device on Thursday in the area of the former Nansemond Ordnance Depot in North Suffolk.

Emergency crews responded to the discovery of an unexploded device on Thursday in the area of the former Nansemond Ordnance Depot in North Suffolk.

According to a city press release, emergency communications were contacted Thursday morning after a construction crew located the device.

Roadways were closed in the area of the Sunfall section at the Riverfront at Harbour View neighborhood, where Suffolk Police and Suffolk Fire & Rescue were on the scene, as well as Virginia State Police, Army Corps of Engineers and Military Explosive Ordnance Disposal crews.

No evacuations were ordered, and Suffolk Fire & Rescue advised in an update at 3:30 p.m. Thursday that the hazmat scene had been cleared, and that nearby residents were no longer being asked to shelter in place.

“Military officials that responded excavated and removed the device and the Army Corps of Engineers will handle any further clean up at the site,” according to the press release, and all affected roadways were reopened.

The former Nansemond Ordnance Depot is 975 acres of waterfront property at the end of College Drive in North Suffolk.

The military stored ammunition on the land during World Wars I and II, and it was used as a disposal area for bulk explosives, small arms ammunition and scrap metal. Removal activities have been conducted at the site since 1988.

Contractor Calvin Sledge and his fellow crew members were doing foundation work on a site in the Sunfall area of the neighborhood on Thursday, near the hazmat scene.

Sledge said that they were informed of what was going on but were not told to evacuate the area.

“We’re still working, and they’re keeping us informed as far as how hazardous it is,” Sledge said.

It was otherwise business as usual for Sledge and the other contractors in the Thursday heat. Sledge said that he felt “OK” about the situation, especially when he saw what the emergency responders were wearing.

“The thing about it is they’re right there on site and their clothing (hasn’t) changed. They have on the same everyday clothing,” he said. “If I had seen them with headgear and different types of equipment, I would have pretty much wanted to leave then.”