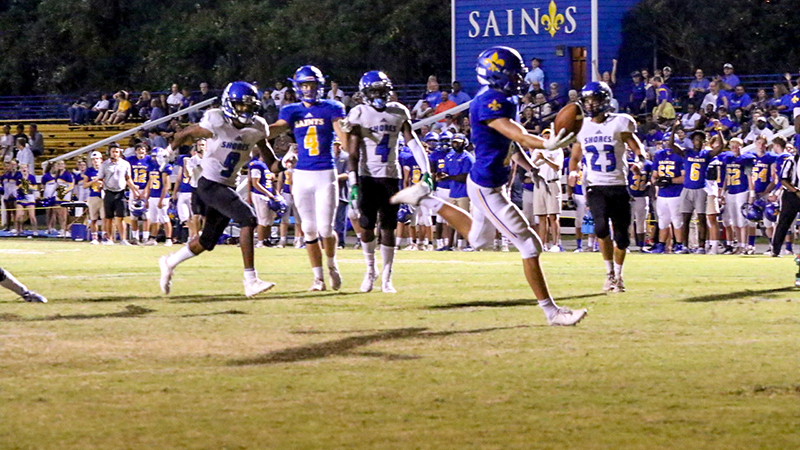 Simon Dowd makes a play for the Saints. The Saints will host Norfolk Academy for homecoming Friday at 7 p.m. (Chris Dailey photo)

All Suffolk schools get back in action again Friday night as the Saints host their homecoming game.

The Saints are coming off a bye week and are currently on a two-game winning streak. NSA has pulled off wins against Portsmouth Christian School and Atlantic Shores Christian School. Last season, the Saints and the Bulldogs squared off in a tough October showdown in which the Saints were able to get a win in a thriller.

Homecoming night always incorporates an exciting atmosphere not only for the players on the field but also for the students, parents, and alumni.

“We felt good about practice this week,” Coach Mike Biehl said. “With everything going on, the guys were dialed in, and it’s about one of the best practice weeks during homecoming week we’ve had since I’ve been here.”

During the bye week, the Saints took the time to rest up and work on more agility and speed. The Saints feel refreshed and ready to go and are looking forward to bringing in a homecoming win.

The Bulldogs go on the road for a tough matchup with Oscar Smith. King’s Fork is coming off back-to-back losses and is looking to get back into the win column. Heading into this matchup, the young Bulldogs know that execution will need to be at a high level for them to win.

Recently Coach Kermit Buggs talked about getting the offense more consistent. They emphasized running the ball last week against Nansemond River High School, and Leo Wethington ran for more than 90 yards. Buggs knows the Bulldogs are young but feels like they are close to putting together a complete game offensively.

Though the Tigers are favored in this matchup, the Bulldogs aren’t a team Oscar Smith can look past. King’s Fork has given some of the current top teams in the Southeastern District a strong push despite some inconsistency in execution.

King’s Fork will be at Oscar Smith at 7 p.m. Friday.

The Warriors are continuing to roll after their first loss of the season against Indian River High School. They are currently on a two-game win streak and will look to make it three in a road matchup against the Grizzlies.

The rushing attack for the Warriors all season has been a staple. Last week against rival King’s Fork, the Warriors rushed for more than 300 yards as a team as playmakers such as X’zavion Evans and Brent Stratton continue to make a tough one-two attack for defenses to slow down.

Not to look too far ahead, but the Warriors will have to be focused against this Grassfield team, as Oscar Smith High School awaits them next week in another booming Southeastern District showdown against top teams.

A win Friday will be crucial for the Warriors as playoff positioning in the Class 5 Region A is taking shape.

Nansemond River will be at Grassfield at 7 p.m. Friday.

The Cavs will head on the road to get some momentum going into the latter half of the season. The Cavs will take on a Great Bridge team that has only one win on the season. This game between both teams should be a competitive one.

Lakeland took a loss to Deep Creek High School last week, but Coach Joe Jones has been consistent in his message to the team. A lot of the Cavs players are getting first-year experience or starting for the first time on varsity, so everything has been growth through experience.

Jones is hopeful that the team will continue to strive particularly offensively. With the caliber of opponents Lakeland has played so far, they haven’t been able to settle in and execute like they want. In this matchup against Great Bridge, it could allow the Cavs offense a chance to try to get on track.

Lakeland will be at Great Bridge at 7 p.m. Friday.