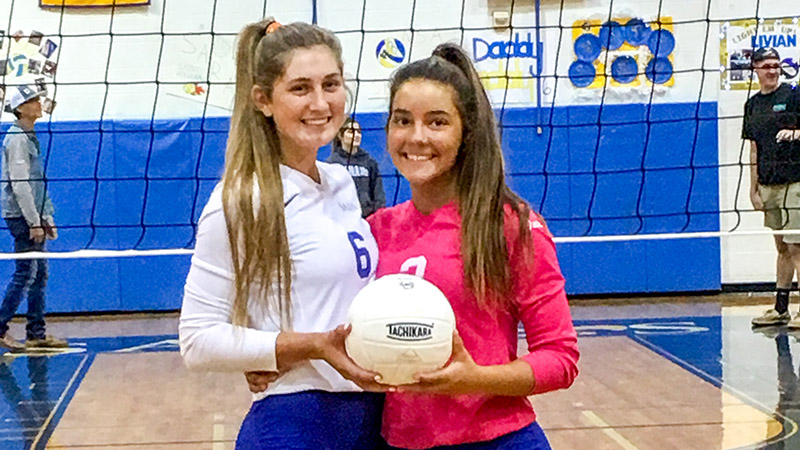 Nansemond-Suffolk Academy standouts Addy Greene and Rylee Bono have both surpassed the 1,000-mark milestones in their respective careers.

The Lady Saints volleyball team had a strong week where they added two more wins, but two players also achieved significant milestones. On Monday, Bono hit a milestone by surpassing 1,000 digs. Greene surpassed 1,000 kills during that game, but there was a ceremonial recognition during Thursday’s game.

Both players have been staples in helping the Lady Saints the last couple of seasons to success. This season, they have the No. 1 ranking in the Virginia Independent Schools Athletic Association Division II. Bono said she had no clue she was even close to surpassing 1,000 digs before the season started.

“I honestly had no idea I was that close, but I am really excited,” Bono said. “My teammates and friends were really excited for me, too, so it was just a really fun moment to share with everyone.”

Bono’s sister Livi was able to achieve a milestone as well when she played for NSA in the past, surpassing 1,000 kills. With this being her junior season, she hopes to have a chance to break the school record for digs.

“I’m hopeful I’ll be able to break and set a new record before I leave,” Bono said. “It’s kind of reassuring to leave something behind. We put some much work and time into this that it feels surreal.”

Greene surpassed 1,000 kills this week, and it was something that Greene had done at a faster pace than some that have done it before her. Like Bono, Greene had no idea going into the game that she was on the verge of accomplishing that feat.

“I’m thankful for the achievement,” Greene said. “It feels like time has gone by so fast.”

Coach Robyn Ross was happy to see her players accomplish such a milestone. Ross said the fact that neither player was keeping track of her stats speaks to the type of players they are; they were only worried about what they can do for the team.

“Getting to see Addy and Rylee reach such a huge milestone in their career was such a huge treat for me,” Ross said. “Milestones like that speak to how hard they work. And without even knowing it, they are teaching the younger players that this program doesn’t focus on awards or recognition — we focus on making each other better on and off the court. I love those girls, and I am very proud of them.”