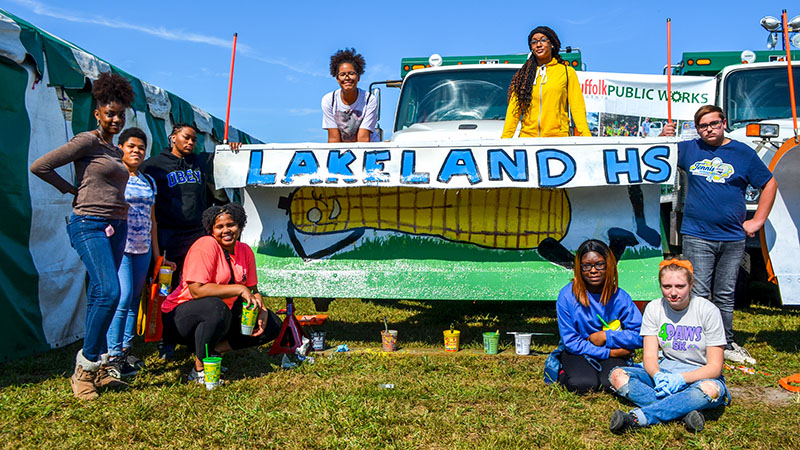 Suffolk high school students worked together in the Saturday heat at Peanut Fest, and their results added some personality and color to a pair of Suffolk Public Works snow plow vehicles.

Lakeland High School and Nansemond River High School students each had one snow plow to decorate with paint and their own imagination. These two snow plows are among 29 that Suffolk Public Works has available to respond to wintry conditions on Suffolk roadways.

“We thought it would be fun to paint the plows in time for winter, if they’re needed,” said Suffolk Litter Control Coordinator Wayne Jones.

More than a dozen high school students were given the art supplies they needed to create their designs on the big, metal plows. Students also wore aprons that were repurposed from National Night Out banners.

“They’re using recycled aprons,” Jones said.  “They look awesome and they’re working out really well. Those banners would have (otherwise) ended up in the landfill, so we put them to use on events like this.”

“The cool thing is that they have to work together as well to come up with the design, which is good for them in terms of team building and working together towards one piece,” Jones said.

Lakeland senior Natalie Williford, 17, said the curved metal of the snow plow made for its own challenge.

“It’s kind of hard to paint because it’s sideways,” Natalie said. “It drips a lot, but we got it.’

The students finished their pieces and enjoyed some tasty Peanut Fest food afterwards. Citizens may spot their handiwork on Suffolk roadways this winter, so if the snow accumulates, keep an eye out for Mr. Peanut and Kenny.

“Maybe next year we’ll expand and have more plows to paint. We’ll see how it goes,” Jones said.

A great weekend at the festival