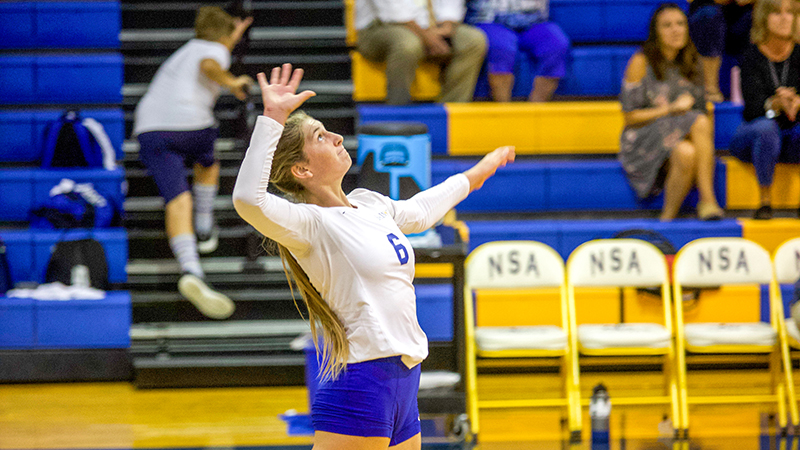 Addy Greene was voted Suffolk News-Herald Player of the Week after having 21 kills in two games and surpassing a career milestone. (Jeffrey Dailey Photo)

Nansemond-Suffolk Academy senior Addy Greene was voted Suffolk News-Herald Player of the Week after having 21 kills in two games and surpassing a milestone.

The Lady Saints volleyball team has been having a strong season. They are 19-5 and are currently ranked No. 1 in the state polls. As a senior, Greene has played a big part in the success NSA has had, and over the course of her career on the court has found ways to step up her game year after year.

Last week in two games, Greene had a combined 21 kills. That helped her surpassed the 1,000-kill career milestone. It’s an impressive feat to accomplish and something Greene didn’t even know she was close to achieving beforehand.

“It felt amazing to get my 1,000th,” Greene said. “But it’s more exciting to see the potential in this team and to see what we have ahead of us.”

Greene has always been a team player, and it has shown game in and game out. Individual accomplishments are fine, but she hopes always to be doing what she can for her team. Coach Robyn Ross said after Greene broke the milestone that she is a selfless player. The Lady Saints focus on making each other better on and off the court, and she feels that Greene is helping set a precedent for the younger girls on the team. This season she has been more than happy with how it has gone up to this point.

“I feel like the season has looked exactly how we wanted it to,” Greene said. “Each of us contributes in our own way, and we wouldn’t be able to do what we do without each other. As a team, we are super determined and focused, and I think the progress we have made so far speaks for itself.”

Greene mentioned how different this year has been in comparison to her last couple of years. She is cherishing the moments she has with her teammates, knowing this is her last go-around.

“I’m realizing these are the last moments I get to play with this family,” she said. “I’m just trying to soak it in and leave everything I have out on the floor.”

Even though Greene is a two-sport standout, the last three years have been remarkable for her on the volleyball court. In 2017, she was the Conference Player of the Year while also becoming the Suffolk News-Herald Fall Female Player of the Year that season as well. In the last two seasons, she has been an All-Conference and All-State selection, and this year likely will not change that path.

After her final volleyball season, Greene will start the process of getting ready for her final season on the softball field for NSA. Greene has committed to play NCAA Division I softball at Virginia Tech.