An oyster feast for good causes 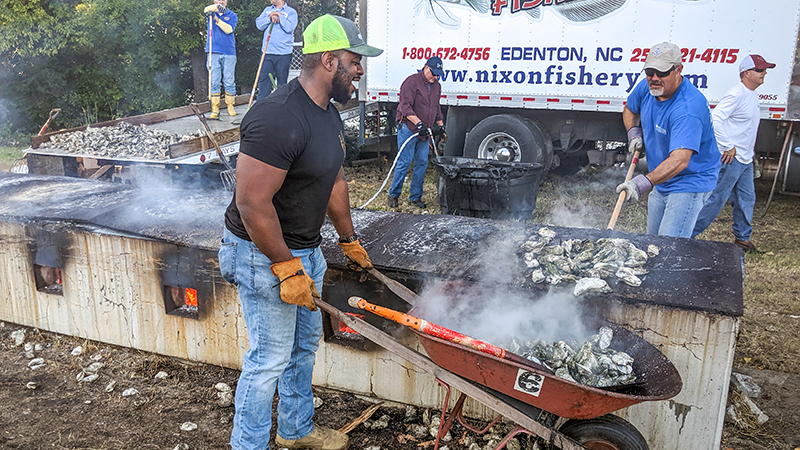 Chris Johns, left, receives a load of oysters from Josh West to deliver to the crowd of 400 people who turned out for the North Suffolk Rotary Club’s annual oyster roast Wednesday at the Rose Family Farm.

For the 400 people who packed the Rose Family Farm for the North Suffolk Rotary Club’s annual oyster roast, they were definitely there for the featured delicacy, but they also came to help support local charities and organizations in the process.

With Lake Burnt Mills as the visual backdrop for the festival and the band “StOLEN” as the audio backdrop — lead singer Win Winslow is a Rotarian in the downtown Suffolk Rotary Club — people cracked into a seemingly endless supply of oysters from Nixon’s Fishery in Edenton, N.C.

For $35, those who came out to the farm feasted on all-you-can-eat oysters, as well as wine and beer from Hoffman Beverage Company.

How were the oysters?

“They’re big, juicy, salty in a good salty way,” said Lisa Graves, who was with her husband Jeff.

The Virginia Beach couple said they enjoy the rural atmosphere of the oyster roast.

“It’s so nice being out here in the country,” Lisa Graves said.

Woody and Cindy Sweet of Corapeake, N.C., said they come to the event every year, no matter the weather. What brings them out?

“What’s in that wheelbarrow right there,” Woody Sweet said as he laughed and pointed to the oysters.

Rather than stand like most of the others at the roast, Bill Turner of Suffolk brought his own chair, having learned from past events. He likes to crack the oysters and run them through the sauce. Usually he brings his own sauce, but he couldn’t get to his oyster kit, so he shared sauce with people at another table.

“We like oysters, and we like the fellowship,” Turner said. “It’s awesome. It’s just coming out and feeling free — breaking the everyday monotony.”

North Suffolk Rotary Club President Tom Powell estimated that, after expenses, the sold-out event would raise roughly $9,000 to $10,000 for organizations such as the Coalition Against Poverty in Suffolk, the Roc Solid Foundation, Soap Chips, Rise Against Hunger, the One27 Initiative, Young Life Suffolk and the Western Tidewater Free Clinic.

It was a full day — from sunup to sundown — for many of the North Suffolk Rotary Club’s 76 members, Powell said, from working the grounds, to building the fire and getting it at the right temperature for the oysters to be ready and distributed to those at the event.

“For the (time) that we’re out here, it’s a machine that works,” Powell said.

The event is one of the North Suffolk Rotary Club’s biggest fundraisers of the year, and Wednesday’s event was no different.

Sandra Harris, who was grooving to the music while eating her oysters, was attending her first roast, but she vowed it wouldn’t be her last.
“I’m having a ball, Harris said. “This is my element right here. I just love to meet, greet, mix and mingle with people. I don’t care where I am. I have a good time. These are awesome, and I’m not even an oyster eater. These are really, really good.”