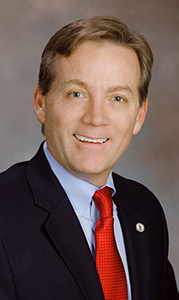 While the makeup of his district has changed, Chris Jones said he approaches his re-election campaign for the District 76 seat in the House of Delegates the same — talking about issues, what he’s accomplished, and what his focus will be.

“It’s going well. I’ve been out and about since we adjourned session,” Jones said about the campaign. “When I was mayor, I represented the entire city, as an appointed mayor at the time. I was all over the city attending events back in the mid-‘90s, so I’ve enjoyed being on the campaign trail and going to meetings and civic leagues and meeting individually with members of the community. It’s just been going well.”

Jones grew up in Chuckatuck and graduated from John Yeates High School before going to the Medical College of Virginia to become a pharmacist, graduating in 1982. From 1985 until last month, he owned and operated Bennett’s Creek Pharmacy.

He served on Suffolk City Council from 1986 to 1998, serving two terms as vice mayor and two terms as mayor before getting elected to the House of Delegates.

While campaigning, Jones said he has been hearing a lot about health care, mental health, education, jobs and the economy as he traverses the district.

“Those are the issues that have been resonating as I’ve been out and about,” Jones said.

Jones last year voted in favor of expanding Medicaid, which he had not done in the past. He said previous versions of Medicaid expansion were not fiscally responsible and did not include provisions for personal accountability.

“It was always the cost of the program, necessary reforms, personal accountability for those who were able-bodied,” Jones said. “Medicaid should be there for those in need, in a time of need, and so it was a combination of getting an administration that was willing to work with us, both in Washington (D.C.) and in Richmond to fashion a responsible plan that would allow us to, in a financially-affordable way, expand and help that population.”

After current Democratic Gov. Ralph Northam was elected in 2017, Jones said the governor expressed a willingness to include a work requirement for Medicaid expansion, which led to the current expansion program, with more than 300,000 having enrolled.

“We did it responsibly,” Jones said. “We put some parameters around participation for those who are able-bodied so they have to get some training or education to be in the program. They can be able to get a skill-set to get themselves off Medicaid and get them back in the working world.”

Jones also cited his support for education, noting the General Assembly has provided for three teacher pay increases in the past five years. In particular, he also noted his work in early childhood education with Virginia First Lady Pam Northam and other stakeholders over the past three years.

On other issues, Jones said economic opportunity is important to the district and the state.

“That’s where my work with Newport News Shipyard, with the Port of Virginia, with bringing Amazon to Virginia, is having an impact on future economic opportunity,” Jones said.

Newport News Shipyard is going to be hiring 2,000 people in the next year to 18 months as it’s looking to build a new class of submarine, he said, and he said he has been working with them on rebuilding their foundry, dredging to 55 feet and widening the channel by 400 feet. Those things, he said, will help bring more jobs to the port, which will mean more jobs to Hampton Roads and Suffolk.

Jones also cited his work in helping provide tax refund checks of $110 or $220 to state residents this fall in negotiations with the Senate, governor and Secretary of Finance Aubrey Layne.

Should he win re-election, Jones said he would be focused on fashioning public policy on the money collected from taxpayers that are due to them because of the additional dollars that were generated from the federal tax cuts. He said he would continue work in career and technical workforce development, as well as aiming to freeze college tuition for a second year.

“This was the first year that we froze college tuition in almost 20 years, and I led that charge and was the architect of that initiative,” Jones said.

The race has proved to be an expensive one, and Jones is more than keeping up on the fundraising front, with $425,585 on hand as of Sept. 30, according to the Virginia Public Access Project.

The district’s dynamics may have changed, but for Jones, it’s still the same deal. He said he runs into people who recall him from decades earlier visiting their elementary school, or remember him as a pharmacist giving a presentation on poison control. Others have recalled to him about his work as mayor attending an event or as a councilman working to build new schools. He said for him, it’s about public service, not politics, and he said he has always been independent in his approach.

“I look at what needs to be done,” Jones said, “and I roll my sleeves up and go about trying to accomplish it.”