Smell the roses at downtown museum 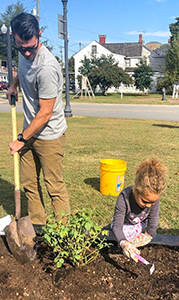 The Suffolk Master Gardeners installed a rose garden at the Suffolk Seaboard Station Railroad Museum on Oct. 12, and the colorful results speak for themselves.

The Suffolk Master Gardeners were first asked several years ago about possibly planting this garden at the museum, which was then operated by the Suffolk-Nansemond Historical Society.

“There had been many comments about there being a rose garden on the property of the train station long ago,” Suffolk Master Gardener Coordinator Wanda Gerard wrote in a press release, “so we felt such a garden would be a good addition to the list of gardens we have around the city that our citizens can enjoy and learn from.”

The original idea was to plant the garden behind the caboose in the back of the train station, but for various reasons it was never installed. It was after the Suffolk Department of Tourism took ownership of the museum that the Master Gardeners once again looked into installing the garden.

“Overgrown shrubs had been removed (and) a tiny library (caboose) had been placed there, but something was still needed to brighten up the area,” Gerard wrote. “The Suffolk Master Gardeners have several pollinator and/or butterfly gardens around the city, a demonstration garden at Sleepy Hole Park, and gardens to welcome visitors to some of our parks or buildings — but nothing like this.

“A rose garden,” she continued, “would also allow them to teach others how to have a rose garden at their own home, while (also) beautifying the train station museum.”

The Suffolk Master Gardeners were grateful to Bennett’s Creek Nursery for donating the David Austin roses and soil, and to the city of Suffolk for the mulch.

“The hardest part about caring for this garden will be having the patience for the plants to take root and grow to bring us a beautiful garden that we know is there,” Gerard wrote.

According to Gerard, the mission of a Master Gardener is to educate others on good gardening practices, and to be good stewards of the land.  She wrote that this garden will allow them to do that.

“It might cause people to share stories about gardens, or to find old pictures of the rose garden that sat upon this property so many years ago,” she wrote. “Perhaps it will be a tool for new friendships to form, or for someone to fall in love with gardening.  Maybe some families will take time to reflect back to when life was a little simpler — when they stopped and smelled the roses.”