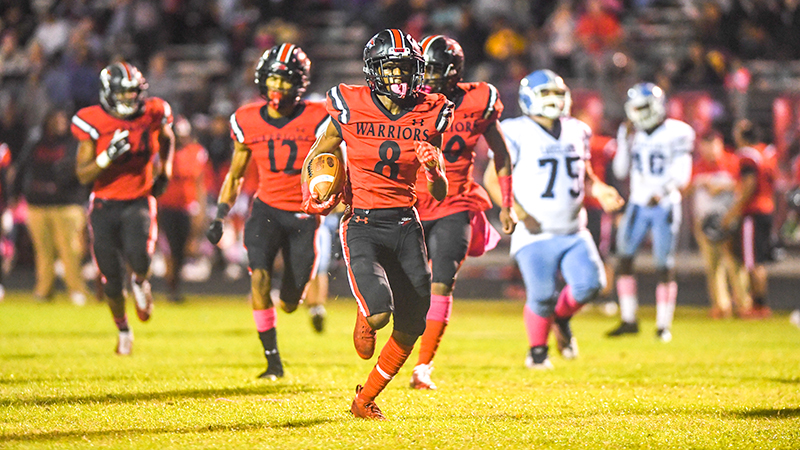 Marlon Sellers had two touchdowns last Friday evening for the Warriors in a win against the Lakeland Cavaliers. (Sarah Murphy Photo)

The Nansemond River High School football team went to 6-2 on the year with the home win, which solidified the Warriors winning the city title in both the 2018 and 2019 seasons. It was also a good win for the Warriors to bounce back with after their loss to Oscar Smith High School the week before.

“We felt great,” Warriors Coach Justin Conyers said. “We accomplished one of our goals. Winning the city title is something that’s important to us and something that we hold dear. Our JV team won it as well, so we are all proud, and we are just looking to continuing to keep working.”

“We have very limited snaps offensively because the defense did such a wonderful job making plays,” Conyers said. “This is how we want to be playing now that we are at the end of the regular season.”

Lakeland remains winless. They will get a chance to return home against Western Branch High School this Friday. The Cavs are a young team, and Coach Joe Jones has confidence in his group. As for the Warriors, who are heavy in the playoff race, they are hoping to carry their momentum into the end of the regular season with a chance to be able to host at least one playoff game this season.

“We have to finish out the season strong,” Conyers said. “We know the goals we have lined up for ourselves, and we need a strong finish to be able to get some momentum to achieve what we want to achieve. Our division is loaded, and we will need to fight through the rest of these games and the postseason to get out of the region.”

Nansemond River will face Hickory High School on the road this Friday.