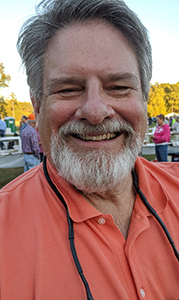 For the second straight time, current Clerk of the Circuit Court of Suffolk W. Randolph Carter Jr. faces no opposition in his run to be re-elected as Suffolk Clerk of Court.

Better known as “Randy,” Carter, 67, who had previously served as Deputy Commonwealth’s Attorney, was one of six people running in 2003 and won by 16 votes over his closest opponent, 24.4 percent to 24.3 percent. In 2011, Carter ran for re-election unopposed.

He noted that there are more than 800 mandated duties placed upon the Clerk of Court that have been established by the Court of Virginia. It means there isn’t a dull moment for Carter, as he said he still likes his job.

While the city’s population has grown since he took office, Carter said the staffing level of the department has not changed much. Currently, counting Carter, there are 15 people working in the clerk’s office. The number of criminal cases commenced through the clerk’s office has risen from 2,955 in calendar year 2016 to 3,245 in 2018.

“We have to do it through technology,” Carter said. “That’s what we have to do to stay ahead.”

He said about $9 million runs through the office on a yearly basis, of which about $2.4 million goes back to the city in fees. He oversees a budget of about $1.6 million for the clerk’s office.

The clerk’s office gets audited every year by the state’s Auditor of Public Accounts, which takes up about eight to nine days. In the most recent audit for the period of April 1, 2018 through Sept. 30, 2019, the state agency, in an Oct. 9 letter, “noted no matters involving internal control and its operation necessary to bring to management’s attention.”

“I think it’s important that the citizens know that the money coming in here is handled in proper fashion,” Carter said.

In fiscal year 2019, besides achieving a clean audit, it collected taxes and fees associated with the legal recording of land records and completed the turnaround of documents with 24 hours of presentation, secured grants to help with conserving historical records, and indexed, imaged and made land records available electronically from 1866 to 1973.

Every Circuit Court in Virginia is a court of record, and the Clerk of Court is responsible for “the custody, safekeeping and proper indexing of legal and quasi-legal papers deposited in his office,” according to state law. The clerk’s office is responsible for filing civil suits, docketing and filing of criminal actions, filing divorce suits and filing adoption petitions. In addition, the office provides services such as:

The clerk’s office, located in the Mills E. Godwin Jr. Courts Building, is not allowed to give legal advice, and it has no authority to speak for judges or predict or interpret their decisions.

As a clerk, Carter said he is in the information management business. He is hoping to be able to allow for electronic filing in civil and criminal actions, similar to how land records are handled. That, he said, “would be a work-saver for us.”

He said his goal is to make things easier for the public, whether they choose to come into the office, call or take care of transactions online.