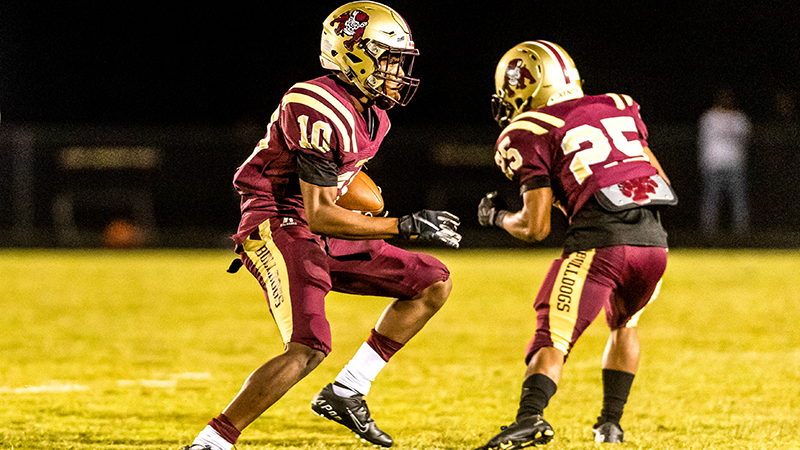 The Bulldogs will look to add another win when they take on Deep Creek High School at 7 p.m. Friday. (Sarah Murphy Photo)

With the regular season winding down, the Suffolk schools are looking to try to finish strong.

The Saints will go on the road for its final regular-season game to take on Roanoke Catholic. NSA needs to win in order to increase their playoff chances. RCS, which competed in the Virginia Independent Schools Athletic Association Division III, is among the top teams in its division and will be looking to take the top seed in the playoffs with a win over the Saints.

NSA is coming off of back-to-back wins, putting up 40-plus points in each. More of the same this Friday will allow the Saints to finish with some nice momentum to end the season. Coach Mike Biehl said throughout this week, NSA didn’t stress about what could be on the line. The ramifications are obvious, but Biehl stressed just going 1-0 each week like they have been and then let everything else take care of itself.

“We are big on maximizing opportunities for what they are, and this is a big one for us,” Biehl said. “It’s easy to get stressed out about the situation, but we aren’t going to do that. We know what’s at stake, but that’s not going to change how we are going to prepare and play.”

NSA will be at Roanoke Catholic at 7 p.m. Friday.

The Bulldogs will go on the road Friday night to face a tough task. King’s Fork is coming off of a strong win last week, and that momentum should carry them into this matchup with the Deep Creek Hornets. Deep Creek started the season 6-0 before losing their last two games to arguably the top two teams in the district, Oscar Smith High School and Indian River High School.

King’s Fork was able to have a strong offensive performance last week, which they needed to get ready for this Deep Creek team. As it stands, the Bulldogs have the No. 6 seed in the Class 4 Region A bracket, and in order for them to keep a hold on that last spot, they will need a win.

King’s Fork will be at Deep Creek at 7 p.m. Friday.

The Warriors got back on track last week with a 50-point shutout effort of rival Lakeland High School. That win cemented the Warriors’ second consecutive city title. Nansemond River will take on Hickory in an effort to bolster their playoff positioning. Eight teams in the Class 5 Region A bracket make the playoffs, and the Warriors currently hold the sixth spot with two games left.

Coach Justin Conyers talked about how critical it was for the Warriors to finish out strong, which is why they have already been in playoff mode.

“It’s very important for us to get in a rhythm right now,” Conyers said. “We have a young quarterback leading us. We want to keep helping him get better. Our region is very good this year, so it’s important for us as we make this push to be playing well if we want to make it into the playoffs and get through the region.”

Nansemond River’s defense put up a strong performance in the shutout last weekend and will look to keep doing so against Hickory.

Nansemond River will be at Hickory at 7 p.m. Friday.

Lakeland will look to shake off its losing streak by picking up a win against Western Branch in the Cavs’ final home game of the season. The Bruins are on a four-game losing streak themselves, and the Cavs have a chance at trying to get on track against them.

Lakeland has had to overcome some adversity because of a young team and key injuries; however, Coach Joe Jones is confident in the program he is building at Lakeland and knows this will all pay off in the end.