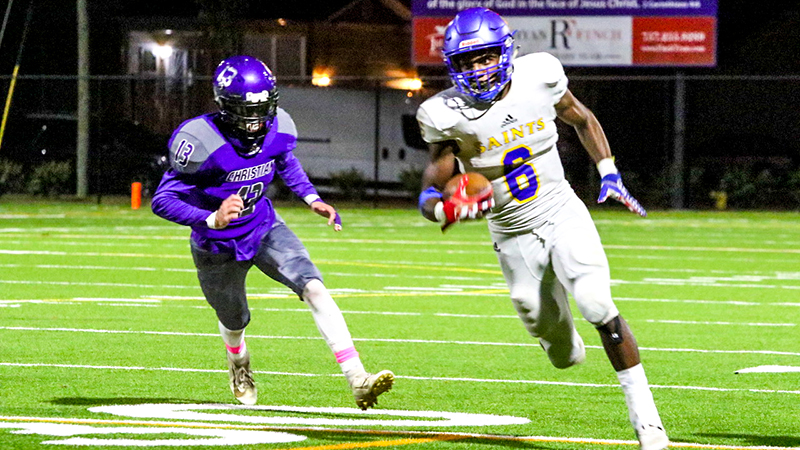 George Pettaway was voted Suffolk News-Herald Player of the Week after a four-touchdown performance in a Saints win. (Chris Dailey Photo)

Nansemond-Suffolk Academy sophomore George Pettaway was voted Suffolk News-Herald Player of the Week after a four-touchdown performance in a Saints win.

Throughout the last couple of seasons, NSA standout George Pettaway has shown himself to be a big play waiting to happen for the Saints. No matter where he is on the field, he has a chance to make a big play.

In a win against Norfolk Christian School, Pettaway rushed for 153 yards on 11 carries. He also added one catch for 47 yards and totaled four touchdowns during the game. It was a strong but not unusual performance for the NSA star.

“I feel like I’ve been playing well, but I’m not where I want to be,” Pettaway said. “If I said I’d be playing my best football I’d be lying. It’s just the mindset I have of not being satisfied with my play.”

The last two games for the Saints, Pettaway has a combined eight touchdowns and more than 350 total yards. Even though Pettaway admits he isn’t satisfied, he is happy that things have been rolling for him as of late after having to deal with injuries throughout the season. A shoulder injury ended his freshman season, so for him, it’s about being patient, and he hopes it continues to pay off. He has big goals for himself this season, with the No. 1 goal being that he wants to become a better leader for the team and just help the team win football games.

Pettaway had a big summer to prepare for this season. He went to a couple of camps and came away with multiple NCAA Division I offers, some of which include Virginia, Virginia Tech, and Pittsburg. He also established himself among one of the top players in the country for his graduating class. However, with all of the attention he has gotten, he doesn’t let it take it away from what he wants to accomplish with his teammates.

“You can’t get caught up on those things because you have to continue to keep getting better,” Pettaway said. “So, it’s very important to not let it distract you, because all those things mean nothing because I have to play the game just like everybody else does. So, I just want to go out there and continue helping my teammates.”

One thing that has been a constant motivation for Pettaway is his family. Knowing that he has the potential to go to college for free through athletics, which will help his family, motivates him. He knows his play will be under a constant microscope throughout the state and country, which also fuels him on the field, knowing that he wants to prove himself constantly.

As the regular season comes to a close for the Saints with playoff ambitions, Pettaway hopes for a chance to help his team go on a playoff run.