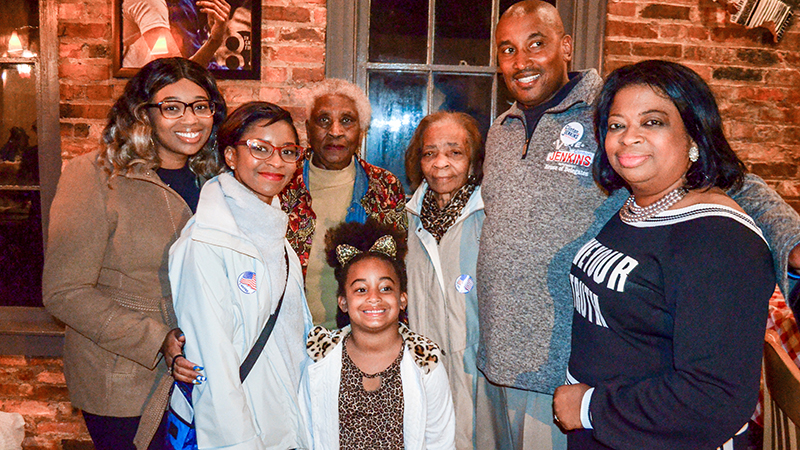 Suffolk’s Clinton Jenkins was part of a blue wave across Virginia that flipped both the House of Delegates and the Senate out of Republican hands, giving Democrats control of both houses of the General Assembly and the governor’s mansion for the first time in decades.

At press time, Democrats had flipped five seats in the House their way, along with two in the Senate.

Jenkins celebrated his victory Tuesday evening at Boogie’s Soul Food restaurant in downtown Suffolk with his family and a room full of supporters. The restaurant was raucous as the Jenkins crowd reveled in the win.

“I’m so grateful and ready to serve,” Jenkins said above the crowd noise. “I’m asking the community to hold me accountable, so I can serve in a manner they want me to serve.”

He thanked Gov. Ralph Northam for his support, as well as Congressman Bobby Scott and Senator L. Louise Lucas. He also recognized his opponent.

“I want to thank Delegate Jones for his leadership, and I look forward to working with him in the future,” Jenkins said.

Jones said he was disappointed by the outcome but would work to ensure Jenkins’ transition to the seat is smooth.

“The residents of the 76th District have spoken, and I was honored to have served for the last 22 years,” Jones said. He noted his more than three decades of elected service to the community, including service on City Council.

“I’ve been humbled by that opportunity,” Jones said.

He said he had called to congratulate Jenkins and will coordinate with him on the transition.

“The seat belongs to the people, not to any individual,” he said.

Jenkins recognized his family’s loving support, and the work of the local Democratic Committee. His praises extended to all of the residents in the 76th district.

“The list never ends, but I’m just so thankful for this opportunity,” Jenkins said. “I just thank God for the people that believe in me.”

In a statement, Northam said Virginians have made clear they want progress.

“They want us to defend the rights of women, LGBTQ Virginians, immigrant communities, and communities of color,” Northam said. “They want us to increase access to a world-class education for every child, and make sure no one is forced to go bankrupt because they or a family member gets sick. They want us to invest in clean energy and take bold action to combat climate change. And they want us to finally pass common sense gun safety legislation, so no one has to fear being hurt or killed while at school, at work, or at their place of worship.”

Democratic Party of Virginia Chair Susan Swecker also weighed in, calling it a landmark win for its candidates and a tribute to their commitment to “issues that matter.”

“We owe this victory to the people of Virginia, who with their votes spoke loudly and clearly in placing control of the House and Senate into Democratic hands.”

While Democrats now have control of both the House and Senate, it wasn’t a total blue wave, as incumbent Republican Emily Brewer held onto the House 64th District seat against Democrat Michele Joyce, with Brewer garnering about 60 percent of the vote.

“I’m incredibly honored to have the opportunity to continue representing the citizens of the 64th District for a second term,” Brewer said. “The seat belongs to the people who live here, and I believe the results from tonight’s election are a testament to all that we have been able to accomplish together over the last two years. I will continue to stand up for our communities and our values to make sure we keep the 64th District one of the best places to live, work and raise a family.”

Joyce, though disappointed in the result, was pleased with her campaign’s effort.

“All I can say is that we fought a good fight,” Joyce said in a phone interview. “I had a wonderful team. We worked really hard, and we look forward to doing it again next time.”

Chesapeake Republican John Cosgrove also won re-election to the Senate District 14 seat in his race against Suffolk Democrat Rebecca Raveson. With 76 of 77 precincts reporting, Cosgrove had nearly 62 percent of the vote to Raveson’s 38 percent.

“I’m just very pleased to have won,” Cosgrove said. “Certainly it was a substantial win, but nothing that we took for granted.”

Cosgrove, between he and his wife, made appearances at 30 of the 72 polling locations in the 14th District and said he was gratified to voters for sending him back to Richmond.

“I think it’s the way I represented the 14th District for the past four years,” Cosgrove said.

Still, he lamented the expected loss of the House of Delegates and the Senate to the Democrats, who he expected would move quickly on issues such as guns, right-to-work and abortion.

“If they end up with the majority in both the House and the Senate, Virginia is in for a drastic change,” Cosgrove said. “Virginia will be transformed into something we’ve never seen before.”

Still, he expects the atmosphere in Richmond to be much less toxic than he said it is in Washington, D.C.

“I think we’ll still have the collegiality, especially in the Senate,” Cosgrove said, “even though the majority has changed.”

Raveson said in a phone interview that she was “disappointed” in the results, but knew that it would be a “longshot.”

“I tried my best, and that’s not too terrible for a first-timer. I’ll be back,” she said.

Republican Sen. Tommy Norment won in the Third District for the Senate with more than 60 percent of the vote against Democrat Herb Jones, who had 40 percent.

In uncontested races, Democrat Louise Lucas of Portsmouth retained her Senate District 18 seat with nearly 93 percent of the vote with 104 of 115 precincts reporting.

In a statement, Swecker said Lucas would remain a prominent leader for Democrats in the state Senate.

“Senator Lucas has shown her dedication and passion for Virginia politics and has been an integral part of Portsmouth’s development and growth throughout her 28 years in office,” Swecker said. “Senator Lucas was a critical proponent for Medicaid expansion and increasing funding for public schools.”

Another unopposed Democrat, Monty Mason of Williamsburg, picked up nearly 90 percent of the vote in Senate District 1 with 51 of 53 precincts reporting. In his only Suffolk precinct in Burbage Grant, Mason had nearly 91 percent of the votes.

Locally, Randy Carter, running unopposed for Clerk of Court, had nearly more than 97 percent of the vote out of just over 20,000 cast.

The race for the two spots for the Peanut District Soil and Water Conservation Director was close. Charles L. Owens and Travis W. Williams appeared to be the winners late Tuesday. The other candidates were Okey Igbonagwam, Richard Gwaltney and Renee T. Sandifer.