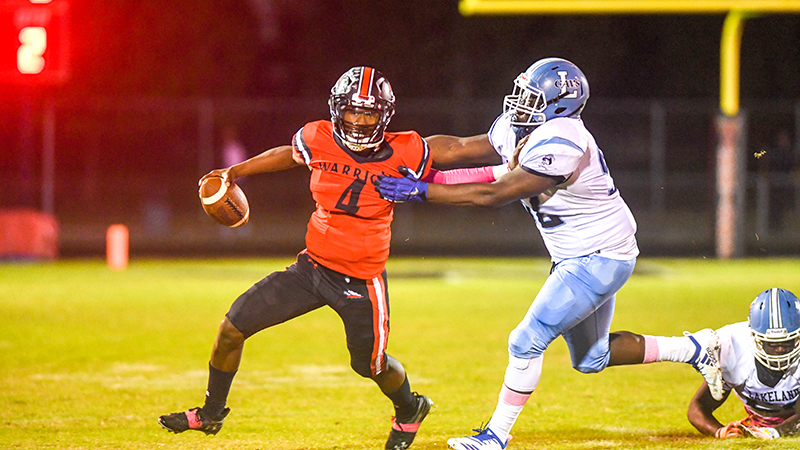 Nolan James looks to make a play for the Warriors. The Warriors will face Deep Creek High School at home in the regular season finale at 7 p.m. Friday. (Sarah Murphy Photo)

The three Suffolk Public Schools will wrap up their regular season Friday night before the playoffs start.

Nansemond River will take on a hot Deep Creek team in a game that has playoff positioning implications. Both teams reside in the Class 5 Region A bracket, with NRHS recently holding the No. 6 spot while Deep Creek held the No. 7 spot. Both teams will likely make the playoffs, but Deep Creek has a chance to take the Warriors’ spot with a win.

The Warriors are coming off of a blowout win over Hickory High School. Brent Stratton had a strong game for the Warriors, totaling five touchdowns on the night. Nansemond River has played in multiple marquee matchups this season, and Friday night will be no different. Coach Justin Conyers has often stated that the Warriors are among the best teams in the district; however, they need to show that they can win the big games. Both teams’ losses have come to Indian River High School and Oscar Smith High School.

Conyers has often stated that the Warriors have already activated playoff mode. They know they are in a tough reason and will need to be at their best, so they have been pushing for that the past couple of weeks. A win against Deep Creek Friday night could have the Warriors heading into the playoffs red hot.

“We still have a chance to move higher up in the seedings, so we have to make sure we come out focused Friday,” Conyers said. “In order to make a run in Division 5, we are going to have to play mistake-free. We feel like if we run the ball and play strong defense, we can beat anybody.”

The Bulldogs will return home for their regular-season finale as they take on Grassfield. King’s Fork is in need of some momentum after being shut out last week on the road against Deep Creek High School. A win can all but assure that the Bulldogs will be in for the Class 4 Region A rankings.

They held the No. 7 spot in the most recent rankings after the loss, but Coach Kermit Buggs has talked the last couple of weeks about wanting to make a late push for the playoffs, and the Bulldogs can all but solidify a spot this week.

Grassfield has won two of its last four games and poses a formidable challenge to the Bulldogs. Being at home should play to King’s Fork hand in the matchup.

The Bulldogs will host starting at 7 p.m. Friday.

Lakeland will have a tough task Friday night going on the road to take on Indian River High School. Indian River is the reigning Southeastern District champions and has remained among one of the top teams in the district this season.

Coach Joe Jones mentioned that Lakeland wanted to treat this game as a way to head into the offseason with some momentum toward their offseason program.

“It’s another opportunity we get to go out and play before heading into the offseason,” Jones said. “We just want the guys to go out there and play hard and have fun. We look at all of this as like a build-up for 2020. December 2 is when our 2020 season begins, and we can hit the ground running with that after we finish this last game.”

Lakeland is expecting 10 starters on both the offense and defensive end to return for next season.

The Cavs will be at Indian River at 7 p.m. Friday.