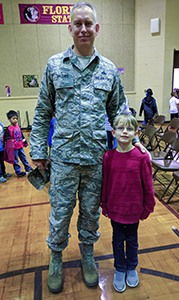 As part of the ceremony, there was a presentation of colors as students who gathered in the school’s gymnasium said the Pledge of Allegiance, and school officials explained what it means to be a Purple Star school. Reading specialist Tawnya Vogel donated a handcrafted wooden flag, made by the veteran-owned and -operated company Flags of Valor, that will be on display in the school’s office. The school also gave pins to active duty servicemembers and to veterans.

“I think it’s great that the Suffolk community and the school system is providing the resources that the kids need for transitioning from school to school,” said Air Force Master Sgt. Greg Mathes, whose son, Holden, 7, is a second-grader at the school. “It is difficult for kids to move from school to school, which we found when we moved from Utah to here, and our daughter had some struggles making new friends. It’s good to see the school supporting that and going under a program that supports that as well.”

His wife, Charla Mathes, along with Ashley Jaramillo — both teachers at Nansemond Parkway — were key in the school’s application for the Purple Star designation.

“As a military wife who’s moved a lot,” Charla Mathes said, “you don’t have family nearby, so this school has become (family) — I mean, there’s people that take my children and help me when my husband’s not here. So it’s more like, not just co-workers I work with, it’s like family members, so it means a lot. It’s just a passion of mine since I am a military member, that we wear that star and we have it. It’s something that was very easy to do. It wasn’t hard work to do.”

Principal Jennifer Conner called the school a second home for kids, especially for those who have moved a lot.

“We need to be able to provide those supports for them and be here for them, but also make families feel welcome, especially during those hard times of transition or having spouses out for deployment, that this is a place that they can come to for those extra supports. It’s not just about the educational piece. It’s about providing those supports for our community.”

The Purple Star designation is designed to help military families identify schools that have support systems in place for children who often change schools due to military relocations.

The program is linked to the federal Interstate Compact on Educational Opportunity for Military Children, which encourages schools and school divisions to have flexibility so that military children are not penalized for requirements in terms of school start age, course offerings and requirements for graduation.

Requirements to receive the designation include having a student-led transition team for new and departing students, people to contact at the school and division levels who take part in professional training and a webpage that lists resources for military family.

The program is modeled after ones in Arkansas and Ohio, with Virginia the third state to debut it.

Suffolk Public Schools has nearly 1,000 students who are connected to military families, and there are 125 military families at Nansemond Parkway, making up about 30 percent of its school population.

Northern Shores Elementary School was one of the first schools in Virginia to receive the Purple Star designation last year, while Nansemond Parkway and John Yeates received it this year.

At John Yeates, the school has put in place a peer transition program, in which Greet Squad students get paired with new students for about 10 weeks to be a first friend and information source at the school. Another student group, the Lunch Bunch, has planned two separate military care package drives to coincide with November as Military Family Appreciation Month and April as the Month of the Military Child.

At Nansemond Parkway, 90 percent of teachers have received professional development from the Virginia Department of Education on the Purple Star program. The school will also be starting an Anchored-4-Life Club, a peer-to-peer program to help military-connected families transition into a new community.

The school has also added a military family album on its website, and has activities planned throughout the school year, including writing letters to deployed soldiers, wearing purple in April to celebrate the Month of the Military Child and a celebration for the school’s military families, along with Memorial Day commemoration activities and learning about Flag Day in June.

New superintendent Dr. John B. Gordon III told parents at his three Meet the Superintendent forums that with as many military families as there are in Suffolk, that the school division needs to be welcoming to those children and their families.

It’s something that the Nansemond Parkway school community has taken to heart.

“This is our family, and so having the students already as our family,” Jaramillo said, “we’re just able to give them one more resource, one more support, one more branch of comfort when they come to school, because … there’s no family around. We are their family, and being able to provide these resources at an extra level, it’s just heartwarming.”