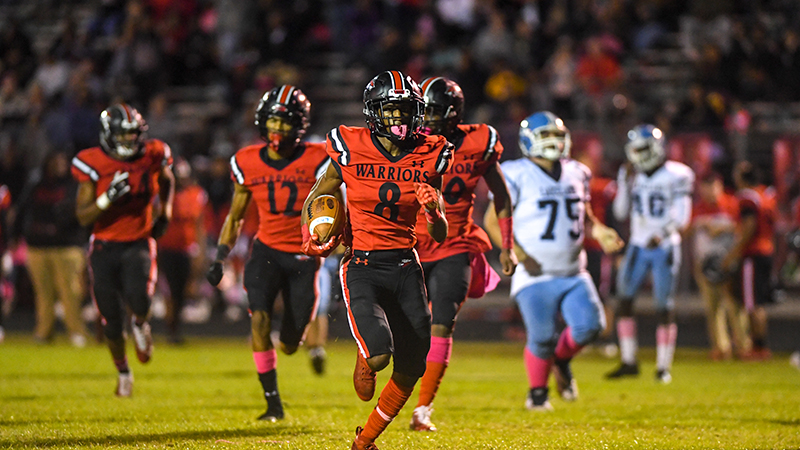 Marlon Sellers was voted Suffolk News-Herald Player of the Week after returning a kick for a score and a interception for a score. (Sarah Murphy Photo)

The Warriors football team has had yet another strong season. For the past three years, Nansemond River has been competing at a high level, and this year has been no different. At 7-2, the Warriors are among the top teams in the Southeastern District, which is due to the array of playmakers the team has.

Sellers has been making plays all season for the Warriors on offense, defense and special teams, and it was on full display in the Lakeland game, where he scored a touchdown on a kick return and on an interception.

“I felt like my performance was good,” Sellers said. “We got out to a good start with special teams. My coach designed the kick return well, and my teammates blocked it perfectly so all I had to do was run. It was a great team effort.”

On his pick-six, Sellers mentioned that he had seen Lakeland run that particular play earlier on in the game, and it was successful. The second time around, they ran the play, and Sellers listened to his coach’s advice, and he was able to make a play on the ball.

“That’s why we trust our coaches,” Sellers said. “They always put us in the best position to make plays.”

Coming into the season, Sellers just wanted to find ways to improve his play for his last season. He wanted to make more impact plays, whether they be turnovers on defense or making a big play through special teams, which he has been able to this year for Nansemond River. He didn’t particularly have any statistical goals he wanted to accomplish, as his focus was mainly improving so he could see how far he could help his team on its quest for a state title.

Sellers has felt good about the senior season he has been able to have for the Warriors. He always feels he can do a little more for his team and is always looking for ways to improve himself. The senior expressed wanting to leave a legacy on the program; he wants to be remembered for having an impact on this team and its future.

Sellers is motivated by his parents. They have sacrificed a lot for him to play football and do the things he loves, so he feels it’s only right he gives back to them by going as hard as he can on the field.

With him being a senior, Sellers is open to possibly playing in college but believes if that plan is for him, he will follow it. If not, he will be happy with all he had done throughout his career.

“It’s all about wherever God leads me,” Sellers said. “Every time I put on my cleats, I treat every game like it’s my last. I just believe everything happens for a reason, so whatever path I go on, whether its playing or not, I will be able to say I gave my all.”