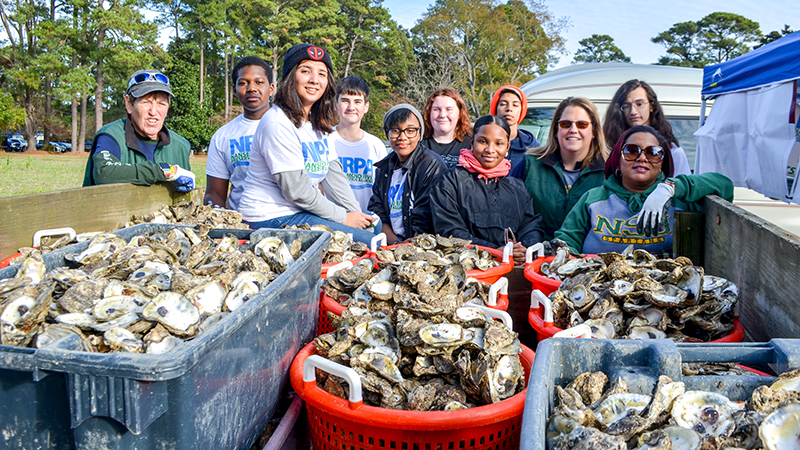 It was a hefty affair for the high school students. According to C.E.&H. Ruritan Club President Mike Mullen, 80 bushels of oysters were cooked for the roast, with the empty shells going into big plastic tubs beneath the rows of tables at the Ruritan Hall in Eclipse.

The students collected dozens upon dozens of containers filled with the shells on Saturday afternoon. They cleaned them up and loaded them onto the trailer to be reused to help replenish the oyster population in local waterways.

“They give up their Saturdays to come volunteer and collect oyster shells, and pick up trash,” said Cindy Pinell, project manager for the KFHS ecology club. “I think that’s awesome.”

The shells collected on Saturday will be cured, and then later used for NRPA’s several oyster reef projects in Suffolk.

Oysters are a critical component of the ecosystem in the Chesapeake Bay and its tributaries. One adult oyster is capable of filtering 50 gallons of water per day, removing both organic and inorganic particles, resulting in cleaner water.

Baby oysters will grow on these shells to further replenish the local population. According to NRPA’s Karla Smith, the shells also give these baby oysters another layer of protection against predators.

“If we just put them on top of the shell, predators will get them,” Smith said. “But if we put the shell down, then the oysters, then more shell, that will build the reef and they won’t be gotten by all of our predators.”