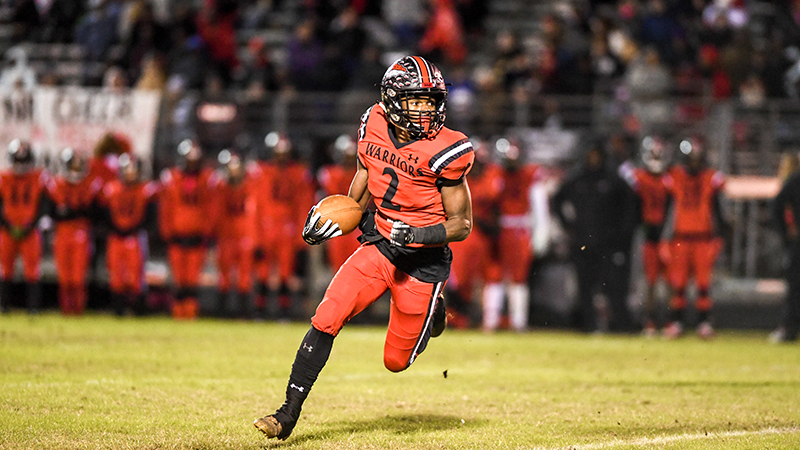 Brent Stratton went for 170 yards on the ground in Nansemond River’s win over Indian River to advance in the Class 5 Region A playoffs. (Sarah Murphy photo)

After falling to Indian River in the regular season, Nansemond River turned the tables and topped the Braves 40-13 in the first round of the Class 5 Region A playoffs Friday.

The Warriors win can be classified as an upset., as they were the No. 6 seed versus the No. 3 seeded Braves. Both teams had combined for more than 15 wins this season, but because of how tough the region is, the two teams had to slug it out in the first round.

Though the Braves won the regular season matchup 40-20 in Suffolk, the Warriors were able to get revenge when it mattered the most. It was a rainy and windy night for playoff football, but Warriors coach Justin Conyers knew the weather played into their hands.

“The weather definitely favored us, but we knew if we played our brand of ball, we would be okay,” Conyers said. “We faced adversity early, but we stay true to ourselves and kept fighting through.”

The Braves got things started, going up 7-0 to start the game. In the second quarter, a score by X’zavion Evans and a two-point conversion put the Warriors up by a point.

Indian River answered back with a score of its own, and Evans followed that with his second touchdown, putting the Warriors ahead 16-13.

In the second half, it was all Warriors as they shut out Indian River and also continued to put points on the board to keep the game out of reach.

Evans finished with 16 carries for 96 yards with two touchdowns and four two-point conversions. Stratton led the way on the ground with 170 yards on just 13 carries. Nolan James added another 88 yards on the ground from the quarterback position. Defensively, Joeziah Autrey had 11 tackles, seven of those for a loss, and Kole Williams added nine tackles.

“We been playing well on all sides of the ball these last couple of games,” Conyers said. “We just have to continue to stay focused and stay the course. We will continue taking things one week at a time.”

Next for the Warriors is a matchup with Maury. The Commodores hold the No. 2 seed in the region and defeated Deep Creek 41-7 in their first-round playoff matchup. Both teams will play at Powhatan Field at Old Dominion University at 7 p.m. Friday.

Knights look to take next step